Colombian bombshell Sofia Vergara has apparently picked herself a man every bit as hot-tempered as she is: The couple had an embarrassing public fight on New Year’s Eve that got him kicked out of a Miami Beach club. 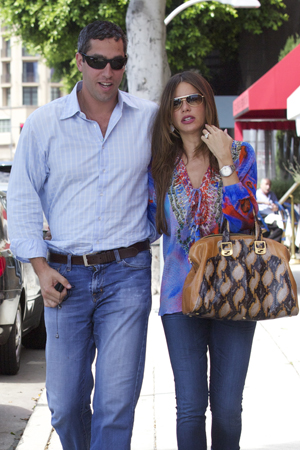 If you’re carrying drinks past Sofia Vergara, better not get distracted by her famous figure — fiancé Nick Loeb is just waiting for an excuse to blow his top.

Security guards at Miami Beach’s upscale Delano Hotel removed Loeb from the VIP section of a New Year’s Eve party, The New York Daily News reported, after Loeb got into a scuffle with a fella who accidentally bumped into Vergara, spilling her drink.

Loeb saw red and tried to force an apology out of the hapless bumper. Vergara turned on Loeb, criticizing him for starting a row in public.

Vergara and the party guest who’d bumped her then started to chat, and she agreed to take what the Daily News calls a “flirty photo” with him.

That was apparently too much for Loeb, who escalated the argument to the point where security came over to investigate. Soon, Loeb was being strong-armed out of the hotel, while Vergara shrieked “F*** you!” at her easily riled man.

Sofia Vergara has boob envy over whom? >>

The argument apparently took place in the wee small hours of the night, presumably after plenty of celebratory toasts.

Embarrassing, to be sure, but hardly crazy behavior for South Beach, where security is used to breaking up drunken brawls and dealing with the other assorted fallout that occurs at nightclubs.

Gossip-watchers may also recall that the swanky Delano Hotel was the site of a suicide attempt from Creed lead singer Scott Stapp, who told VH1 that he jumped off the balcony of his penthouse back in 2004 after a scary drug binge.

After surviving the 40-foot drop, he lay on the ground for 2½ hours with a fractured skull and broken hip and nose. Improbably, the first person to happen upon Stapp’s prone body was rapper T.I., who Stapp credits with saving his life.