Season 8 American Idol winner Kris Allen starts the new year with a broken wrist and a baby on the way. 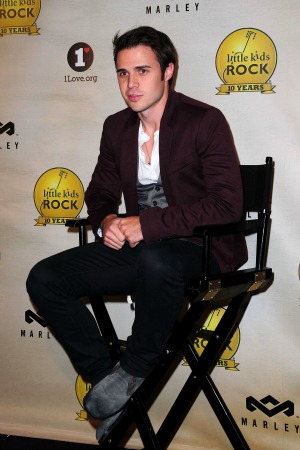 A car wreck is definitely not the way to start off the new year, but that is exactly how Season 8 American Idol winner Kris Allen spent it.

According to Allen’s mother, Kimberly, who relayed the news to fans via Twitter said, “From Kris: he’s in a lot of pain, arm broke, may not play guitar for a while. Prayers welcome please! #headoncollision.”

His mother also shared a photo of her son in the hospital with his right arm wrapped up from his wrist to just past his elbow. He was also sporting a neck brace.

The singer, who was in the car with his wife, Katy, and his dog, Zorro, shared some exciting news on Twitter as well about a new arrival in 2013, “Yes, I got in a really bad wreck tonight and yes I’m having a lil baby.”

The good news is that everyone is going to be OK and Allen promised his fans that, “Don’t worry everyone I may have broken my wrist but the#OutAliveTour is still on.”

It sounds like the AI champ is not only grateful for his family’s safety and the continuation of his tour, but he’s also thankful to the car manufacturer that got everyone through the wreck. Yep, he even thanked Ford, the car that was a part of his prize package from his 2009 win.

He praised, “@ford for equipping me with a car that kept my whole family @katyallen @ZorroPup and the little one we have on the way safe.”

Maybe Ford will help him with a replacement vehicle that is perfect for a growing family?