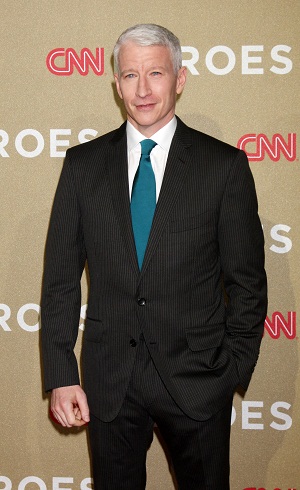 In Kathy Griffin‘s defense, CNN really ought to have known better. However, in the cable news network’s infinite wisdom, it placed its bets on Griffin’s ability to have some self-restraint and hired her to co-host its New Year’s Eve coverage alongside Anderson Cooper. As should have been expected, folks at CNN were completely let down.

Unlike Anderson Cooper‘s pants, which are what Griffin was apparently far more interested in. We watched as Griffin continually ducked down toward Cooper’s crotch.

Here’s the thing: If the bash were held on Comedy Central or if Griffin’s co-host hadn’t been the adorably shy and freshly outed Cooper, this would have gone over a lot more smoothly. Even if, you know, her inappropriate behavior had ended with CNN owing a few pennies to the FCC. But it wasn’t, he was, and it didn’t.

The bash was held on a news network, and Cooper was not only there, but he also appeared to be painfully uncomfortable… which made viewers feel the same way.

Is there a rehab for out-of-control absurdism?

As Cooper tried to conduct a normal, tasteful New Year’s Eve broadcast, Griffin didn’t pretend to go down on him just once but numerous times. Each time she’d squat down, he’d either yank her back up or squat down beside her. If A.C.’s blood weren’t as silvery-white as it is, you’d have probably seen him blush.


Griffin’s actions would be tasteless in any situation, but they could have been funny if her partner were in on the joke. Instead, the aggressiveness of the unwanted situation had everyone on edge — and rightfully so. It’s safe to assume this is far worse than when they let Ricky Gervais host the Golden Globes. Hopefully, someone will force Griffin to offer up an apology to our beloved A.C. and to the traumatized viewers.