Can an actress who portrayed a young, naive schoolgirl in Gossip Girl transition into her “real form” as a fearless and rebellious musician? Is this great acting or a giant, unsuccessful leap? You be the judge! 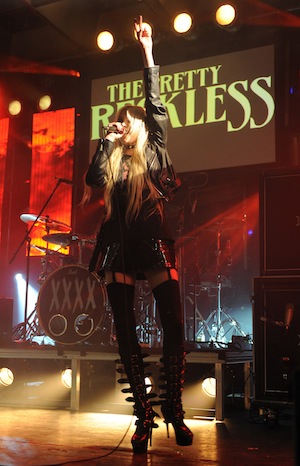 You know, from the epic show Gossip Girl? Taylor Momsen is the actress who played her, and it’s safe to say she’s all grown up now.

Her raunchy, controversial image (which always pushes the limits) seems a bit overdone. I’ve often thought she overcompensates for being on Gossip Girl by rocking leather and lingerie, accompanied by ridiculous amounts of black eye shadow.

But enough of the introductions. She’s hot — and she’s also the lead singer of the band The Pretty Reckless. Other members are Ben Phillips, Mark Damon and Jamie Perkins.

According to Josep Vinaixa, the track entitled “Kill Me” is the first off the rumored-to-be-titled XXXX album, which is to be released this year. The group’s resentment-filled musical style remains true to itself with this track, and if you’ve never heard of them, you absolutely must check out their earlier singles, such as “Light Me Up” or my favorite, “Just Tonight.”

If “Kill Me” isn’t an attention-grabbing title, I don’t know what is

The Pretty Reckless always try to err on the side of rebellion and garner as much attention as possible. Mission accomplished. I mean, check out these dark lyrics:

Well, we don’t know exactly why waking up alone warrants death — but the song is definitely killer.

If this is just a glimpse of the album, I’m sold. Granted, it isn’t a headlining track (even if it’s intended to be), but it’s trippy and angry enough to get my gears turning.

Momsen’s purring voice starts off this song, and the drums and electric guitar snap in with startling whiplash. Her performance is moody and sultry. The instrumental is wild, and the execution is restrained. It’s an odd balance between dreamy (almost sleepy) and fury that is, ironically, soothing. This just screams being fed up and is not for everyone. (Listeners beware: There is cursing!)

Although Momsen’s style can seem overdone, I can’t find anything or anyone who compares to her. She’s setting herself apart from the market — and that’s always a good sell.

Stay updated! For more music reviews, check these out: