A show about a neighborhood full of aliens? I had my doubts, and then I watched it. It soon became obvious why The Neighbors is nominated for the People’s Choice Award for Favorite New TV Comedy. Meet Toks, who plays the matriarch alien and who, as you are about to find out, is not only funnier than hell but may also be the most interesting woman on TV. 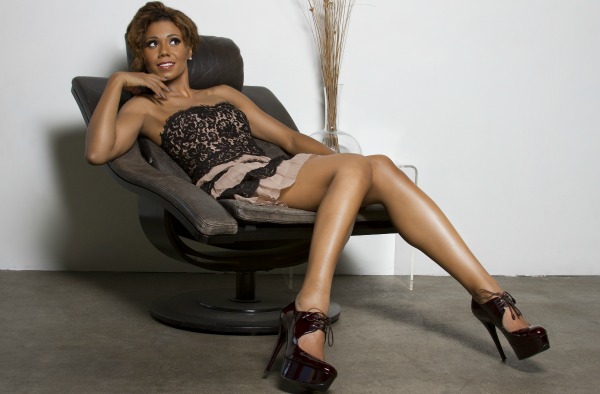 SheKnows: How were your holidays?

Toks Olagundoye: Really good. I’ve had a really good time so far. It’s been a bit cold here on the East Coast, but other than that, it’s been fun.

SK: Are you snowed in?

TO: No, thankfully. We’ve had some sleet, so it’s just a bit slippery more than anything else.

SK: What did you do for New Year’s Eve?

TO: Me and my gay boyfriend…

SK: …which every girl must have…

TO: Must have. It’s a necessity for life. He’s the concierge at Tiffany’s on Fifth Avenue in New York, and he always comes up with something to do. So I got all dressed up, he told me where to meet him and it was “Happy New Year!”

SK: In ABC’s series The Neighbors, you play an alien mom named Jackie Joyner-Kersee. First, I have to say I watched it, and I LOLed on several occasions. Did you sort of feel like an alien when you first moved from Nigeria to the U.S.?

TO: More than a bit, yes. I didn’t move directly to the U.S. I mean, my family stills lives in Nigeria and everything, but I had gone to boarding school in England, and my mum’s from Norway, so I’ve spent quite a bit of time in Norway. But for some reason, the U.S. is very different from anywhere else. Did you see the episode [of The Neighbors] where I’m in the mall?

TO: That’s pretty much what it was like for me. I had never seen anything like it in my life.

SK: One of my favorite lines from that scene was your concern for where some of the names for American food come from. You said something like, “So kids’ meals aren’t really made with kids?”

TO: I know. That was actually kind of hard. The “baby back ribs” line was kind of hard for me to get out without kind of cracking up.

SK: So it was a little bit of a culture shock for you when you first got to the U.S., regardless of the fact that you had traveled quite a bit before coming here.

TO: Oh yes, I’ve had a very international life. I was an only child, and my parents didn’t want me to be spoiled, so they would send me to school in Switzerland, and I learned French, and we went to Paris. I had a really great childhood, but I always wanted to go to the U.S. Who doesn’t?

SK: The fun you have with different accents is kind of starting to fall into place. 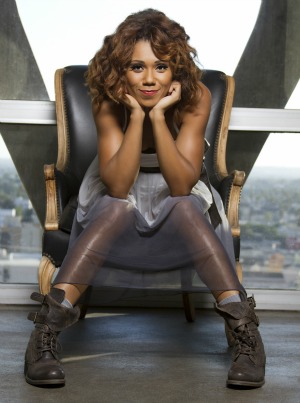 TO: That’s how I grew up. My mum’s accent when I was a kid always changed depending on who she was talking to, so she had an Indian best friend, and when she talked to her on the phone, her accent would change, and I just kind of assumed that’s what you did. I started out with a Nigerian accent, and we lived in England when I was 3 and 4, so I had a British accent. My mum said I had both an Indian and Jamaican accent because I had both Indian and Jamaican preschool teachers. Then I went to an American school in Nigeria and developed what I thought was an American accent. In the U.S., I primarily work in my British accent but socialize in my American accent, so it’s kind of odd. Most people think, “Oh, she’s clearly insane.”

SK: The Neighbors is nominated for a People’s Choice Award for Favorite New TV Comedy. Where were you when you found out?

TO: A bunch of us actually were in a van that was taking us to location. And one of our guest stars said, “Oh, someone just tweeted me that we’ve been nominated.” So all of us took our phones out, and we were like, “Oh my God! Oh my God!” And Lenny [Venito] and I, besides the children, are probably the two most excitable on the cast.

SK: I read that you issue a blanket apology to makeup artists because of your tattoos. How many do you have?

TO: I don’t have that many. I have five. I’d love to be covered in tattoos, but I don’t think it’s very practical. I enjoy tattoos. I think they’re gorgeous.

SK: So you would do the whole sleeve thing if it weren’t, as you say, terribly impractical?

TO: I would do it. I think it’s gorgeous. Some people get some really original or Celtic art. I have a couple of friends who have some of the most beautiful artwork, tattoo-wise. I have a large one around my ankle that my makeup woman, who is amazing, has to cover up for me every morning.

SK: Oh! I remember seeing that in one of your short features on YouTube. In Til Death Do Us Part, you posed throughout, and you can see your ankle tattoo. So do you regret any of your tattoos?

TO: I have one on my back that I’m not thrilled about because in college, someone dared me to do it. It’s a zodiac sign, so it’s fine, but it’s not the most artistic thing in the world.

SK: Damn. That’s one sign I don’t know a lot about.

TO: We’re very particular people. We tend to be overachievers, and we tend to be incredibly sensitive. 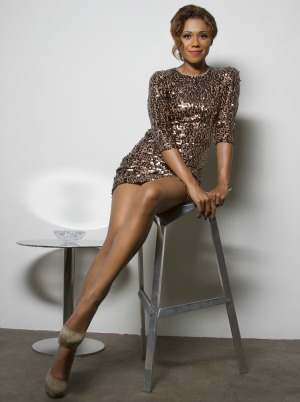 SK: You’ve written and produced shorts, some of which don’t depict marriage and relationships in a particularly flattering light. Are you blissfully single or single and ready to mingle?

TO: Neither. I actually… I, uh… I, well… I’m seeing someone. I’ll put it that way. I get a big kick out of relationships because they’re just so complicated and people are always complaining about it. There’s so much comedy in that.

TO: Without a sense of humor, you’ve got nothing, really. I’m one of those girls that’s very OK with being single. I’m never really looking for someone when I am single. But yes, I’m seeing a very nice man right now — he’s lovely.

SK: Well good! You have set the record straight for me, because I stalked some of your tweets, and you tweeted something like, “Great holidays with [so and so] — they spoiled my little one.”

TO: Oh, yeah, my four-legged little one. My dog.

SK: OK! In everything I’ve seen and read about you, I didn’t see anything about you being a mom.

SK: Sorry! I meant no offense.

SK: Let’s get to know you a little better. When you were first starting out, what’s the goofiest job you had?

TO: I wasn’t really allowed to do comedy at first. I was in a movie called The Salon. I was comic relief, and I wore this really horrible blond wig, and it was so much fun. They let us ad lib and do what we wanted.

SK: Let’s say the Mayans had been right and Dec. 21 had been the end of the world as we know it. What would have been your last meal?

TO: Lasagna. I don’t eat carbs or dairy anymore, and I miss it. So I’d have an entire pan of lasagna.

SK: No carbs or dairy? Is that for staying slim or for dietary reasons?

TO: Yeah, dairy doesn’t react well with my skin. My face breaks out, so I can’t do that for obvious reasons. And the carbs, that’s to stay svelte for the silver screen, or the small screen or whatever screen will have me.

SK: Since you have an accent and you’re from Nigeria, what is the most annoying thing Americans ask you, besides how to pronounce your last name?

TO: When I was a kid, there were annoying things people would ask like, did I grow up around lions and stuff like that. Nowadays, with the Internet, people know a bit more. Questions people ask me now make sense. Honestly, the thing that sort of takes me aback a bit — and it’s not annoying, and I know why people do it — but people refer to me as an African-American. I know it’s the politically correct term for American black people, but it’s not the politically correct term for foreign black people. It’s awkward to correct people: “I’m not African American. I’m from Africa. I’m Nigerian. I’m sorry.” And people don’t know what to say, so it’s sort of political correctness backfiring.

TO: Yeah, but I have to say for the most part, when people ask me about where I grew up, it’s just because they don’t know, and none of it is really annoying. I’m just happy people are paying attention to me.

SK: You’re such a good sport, so I feel OK telling you that when I saw your full name — Olatokunbo Susan Olasobunmi Abeke Olagundoye — there were all these multisyllable words that start with “O,” and then there’s a “Susan” in there.

TO: I know. My family played a couple of cruel jokes with me about my name. My Trinidadian uncle was allowed to pick one of my names, and he picked “Susan.” He couldn’t pick “Bridgette” or “Suzanne.” He had to pick “Susan.” And my first name, Toks, is short for Olatokunbo, and it’s given to kids who are not born in Nigeria, but I was born in Nigeria. So not only do I have to explain my name to foreigners, but I have to explain it to Nigerians as well. I’m sitting next to my mum right now.

SK: Clearly, your parents have a sense of humor as well.

TO: You have no idea. My dad has a really good sense of humor, but my mother, oh my Lord. Her and her brother, good grief. The goofy things I have been through with my mom — it’s why I’m on a sitcom.

SK: So if your mom is sitting right next to you, what are you girls doing today? Anything fun?

TO: Yes, we are going to take advantage of all the after-Christmas sales. We’re off for a bit of shopping.