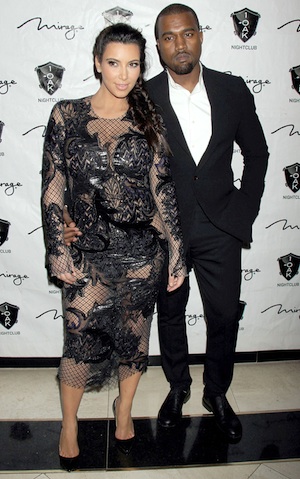 New mother-to-be Kim Kardashian made her first official appearance since her pregnancy announcement on New Year’s Eve. Kim hosted a star-studded New Year’s Eve bash at the Las Vegas nightclub 1OAK at the Mirage Hotel and Casino. She talked to Us Weekly during the soiree and revealed her first trimester woes.

“I have felt good. I haven’t had any morning sickness, but it still isn’t the easiest,” Kim said about her pregnancy. “People always say it’s easy and fun. It’s definitely an adjustment learning about your body and stuff like that. I’ve been feeling good so that’s good.”

When asked if she would want to find out the gender of her baby, which is typically done between the fourth and six month of pregnacy with an ultrasound, Kim didn’t hesitate. “Of course I do want to know. I can’t find out yet, but I do want to know.”

Us Weekly also reports Kanye West plans to wed Kim Kardashian once her divorce from NBA player Kris Humphries is finalized. A source for the magazine says, “[Kanye’s] told friends and family he was gonna [marry] her since the day they met.”

Both Kim Kardashian and Kanye West were all smiles at the 1OAK New Year’s Eve bash. Kim wore a lacy, long-sleeved black dress cut just below her knees and her hair was tied back in a chic, braided ponytail.

Congratulations again to the happy couple. We wish Kim Kardashian the best of luck with her pregnancy and impending motherhood!