Lindsay Lohan swears she’s going to stay out of trouble this New Year’s Eve by staying in her hotel room in London with family and friends. Good luck! 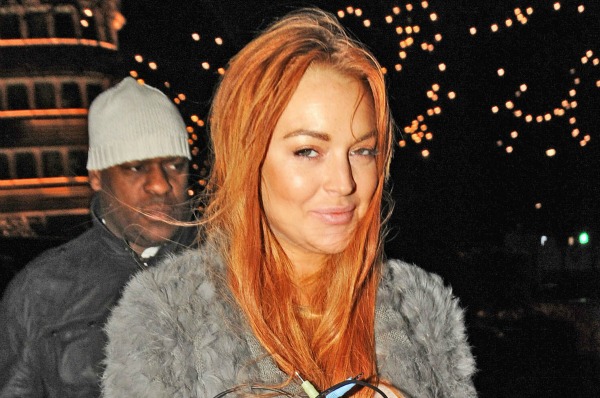 Here’s one final Lindsay Lohan story of the year for you. Lohan swears she’s staying in this New Year’s Eve. Before you fall into a fit of laughter on the floor, it appears the Liz & Dick actress is trying to stay out of trouble in order to stay out of jail.

The troubled starlet flew to London on Friday to catch a glimpse of her on-again, off-again date, Max George of the boy band The Wanted.

According to E! News, a source revealed, “She likes him and he likes her, but nothing has come of it.”

However, there has been no confirmation that Lohan was even able to catch up with George, since The Wanted is performing in New York for Dick Clark‘s New Year’s Rockin’ Eve. It’s entirely possible that the couple passed each other in the air as one traveled to the U.K. and the other traveled to the U.S.

Now that she’s without a man on the last day of the year, the Mean Girls actress is reportedly going to spend the night safely inside with her family and friends at the Dorchester Hotel. This certainly would be a great idea since 2012 was rife with run-ins with the law.

Not only did she end the latter half of the year with another arrest on Nov. 29, but her probation was revoked by a Los Angeles judge. This might force Lohan to serve another eight months in jail — plus any additional jail time for her car accident case in June.

At this point, staying in on New Year’s Eve is a good idea, and hopefully it will prove to the judge that she’s trying to turn over a new leaf for 2013.

We’ll believe it when we see it.