Jenny McCarthy is taking it to the fans to help choose her New Year’s midnight kiss. 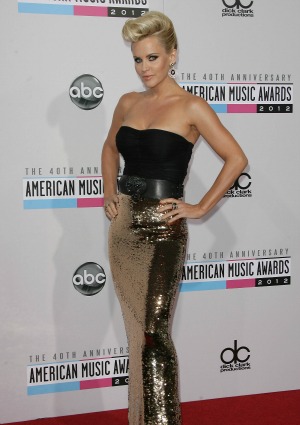 Jenny McCarthy will again be co-hosting Dick Clark’s New Year’s Rockin’ Eve alongside Ryan Seacrest, but one mystery is yet to be revealed. Whom will she kiss at midnight?

The 40-year-old made a big splash at last year’s show when she kissed a New York City cop at midnight in front of the TV cameras. This year, she’s taking suggestions from her fans.

Followers on Twitter can actually tweet the Playboy model @JennyMcCarthy and decide whether she should kiss someone from the #military, #FDNY, or #AverageJoe.

This will be her third year co-hosting the show, but don’t worry, gentlemen, you have another four years with McCarthy at the helm. She just recently extended her contract with the show.

One big thing that will be missing from this year’s show is the man who created the ABC New Year’s Eve tradition of watching the Times Square ball drop, Dick Clark. Clark passed away in April after suffering a massive heart attack at the age of 82.

While this is the 40th year of the telecast, the American Bandstand host didn’t take over the show until 1975. From then on, it became an iconic part of the holiday and ushering in the new year.

This year’s show will be five hours long, so there will be plenty of time not only to help McCarthy choose her New Year’s kiss but also to honor the man who started America’s rockin’ new year.