Once Upon a Time has hired another pretty face. Sonequa Martin-Green has joined the show in a mysterious role. As with all newcomers, her true identity is a secret, but we have an idea who she might be. 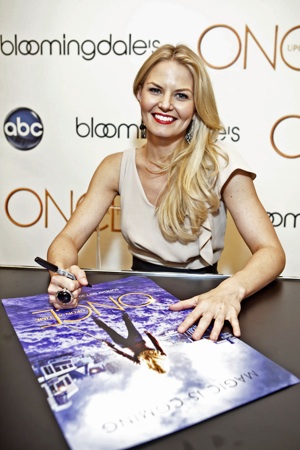 Once Upon a Time is beefing up its cast. The show is adding a new recurring character who will mix it up with the locals. The role will be played by actress Sonequa Martin-Green, who already stars on another hit drama.

According to EW, Martin-Green will play Tamara. She’s “a charming and likable woman who’s secretly highly ambitious and a fearless leader driven to get what she wants.”

Does that sound like anyone from Disney’s roster of characters?

A few years ago, the studio released The Princess and the Frog, which centered on a young African-American woman named Tiana. She too was strong willed and ambitious. Tamara and Tiana sound awfully similar. Could they be one and the same? ABC hasn’t confirmed the character’s real identity, but it’s a solid guess.

Once Upon a Time gives major hint to Whale’s identity? >>

Tamara’s expected to debut during the second half of Season 2 and could stick around until Season 3. Martin-Green’s a busy woman who already has a gig on AMC’s The Walking Dead. During the zombie drama’s midseason finale, she debuted as Sasha, a member of the new gang of survivors.

The Walking Dead: Another episode, another massacre >>

The Walking Dead’s cast constantly changes, so we’re not sure what this means for Sasha’s future. The writers have no problem killing off main and supporting characters.

Once Upon a Time returns Sunday at 8/7c on ABC. Meanwhile, The Walking Dead won’t return until Feb. 10 at 9/8c on AMC.

What do you think is Tamara’s fairy-tale identity?