It is totally 100 percent official, straight from the horse’s uterus: Kim Kardashian is pregnant, and she confirmed the news herself on her blog. 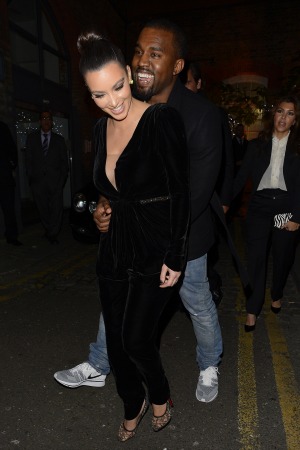 The reality star told fans that she has the next generation of pop culture in her womb with a blog post titled “New year, New Beginnings.”

“It’s true!! Kanye and I are expecting a baby,” Kardashian wrote. “We feel so blessed and lucky and wish that in addition to both of our families, his mom and my dad could be here to celebrate this special time with us. Looking forward to great new beginnings in 2013 and to starting a family. Happy New Year!!! Xo”

The news was welcomed with huge excitement by Kim’s family, who tweeted their joy over the family’s newest cash cow as soon as Kanye spilled the beans himself.

Kourtney said, “Been wanting to shout from the rooftops with joy and now I can! Another angel to welcome to our family. Overwhelmed with excitement!”

Khloé, who has long struggled with her own fertility, put her heartbreak aside to congratulate her sis. “Kimye!” she wrote. “Keeping secrets is hard with so many family members! Especially when you are so freaking excited!!!!! LOVE is everything!!!!”

Meanwhile, there’s one small matter still left to be cleared up: Kim’s divorce from Kris Humphries is far from final. The estranged pair is due in court in February 2013 to continue the proceedings after the basketball star accused Kardashian of defrauding him for TV ratings.

So far, Humphries has remained mum on this hot new development.