So she’s cute on New Girl, makes me want to wear more cotton in her commercials, and has a creamy voice that could calm a baby — but this video manages to be just as adorable as the girl herself! 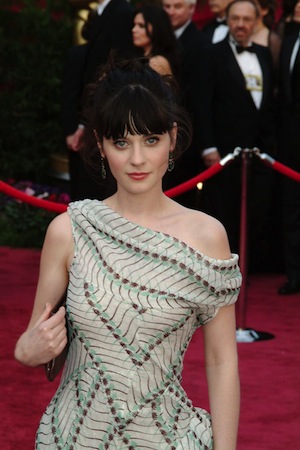 This is my attempt at trying to deflate the otherwise ballooning depression I am suffering from as a result of the holiday season ending.

What do I do? Find the most entertaining holiday music video to quell my misery.

Looking like Katy Perry may qualify you to make music

Kidding! But Zooey Deschanel does bear a strange resemblance to Miss Perry, right?

She & Him is 50 percent Zooey Deschanel, and 50 percent a male voice (M. Ward) that doesn’t matter (just kidding!). So they drop this video for “Baby, It’s Cold Outside” and I was excited to see this doll-like beauty prance around the screen for attention. But, instead, their rich voices are animated by a cartoon.

I was pleasantly surprised by the tension between the male and female cartoon characters who perfectly depicted the song. They were charming and anxious, and the story line was deceptive and entertaining. In the video, a gentleman who approaches a woman’s home during a snowstorm gets his drink spiked because she doesn’t want him to leave. The extent she goes to for him to stay is hilarious.

Her desperation is masked tactfully behind her attractiveness, and his fear of staying is nothing short of giggle-inducing. I enjoyed every moment of this video, and of course, it doesn’t hurt that it is a holiday hit that all of us love.

Usually, I would be disappointed that the real life, good-looking band members were not featured, but this mini-movie makes up for it very quickly. This definitely will be a holiday video to watch for years to come!

This video was directed by Elliot Dear, according to the duo’s website.

Does the gentleman give in? You’ll have to watch to find out!