What a comeback video. 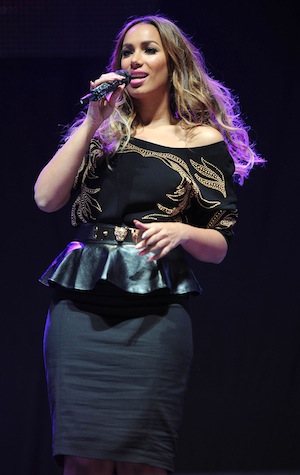 Last time I saw someone in a cage, it was a Lohan

Nope, that wasn’t a jail joke. Remember Lindsay Lohan‘s cage in her “Rumors” music video (foreshadowing her later years, perhaps) ? She just got upstaged by someone with actual vocal ability (and not to mention societal respect).

That’s right, it’s our Leona Lewis — and she is back, but was she ever really gone? I haven’t heard a hit since “Happy,” but even then that song didn’t compete with “Bleeding Love.”

“Lovebird” is a song off her album Glassheart, which is yet to be released in the United States, says Just Jared. Well, the music video is vibrant, and Lewis is a visual centerpiece — similar in a glamorous sort of way to Kelly Clarkson‘s “Catch My Breath” video.

While Leona tends to err on the side of simplicity, usually it’s always nice to see some dimension in her looks. Her normal, glowing natural looks is replaced by one only a diva songstress can possess. Long flowy dress, playful makeup, and a flirtatious performance make the minutes fly by as you watch.

Her single is not doing well in the United Kingdom, the Daily Mail writes. Perhaps this video will manage to bolster some positive attention and give her the boost she needs on the charts. I mean she has the ability. It’s a matter of marketing — and with this striking winner of The X-Factor U.K., she manages to do a good job by just appearing in this video.

Classy and elegant, she manages to dazzle the screen with her fashion, beauty, and portrayal of the song. We need to make this song bigger in the United States and get more plays for the video!

Leona fans must rally together!

For more editor’s picks, jump right into some of our latest selections:

Avicii and Nicky Romero “I Can Be The One”
She & Him “Baby, It’s Cold Outside”
Brantley Gilbert “Miles From Home”