Get ready — Kim Kardashian is pregnant with Kanye West’s baby! 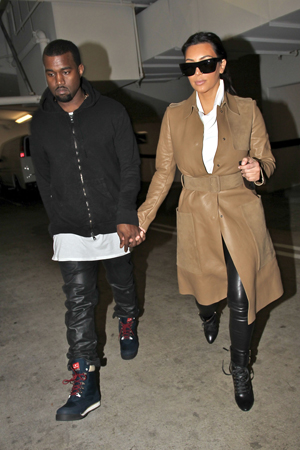 Yo 2012, Imma let you finish, but Kim Kardashian is having the best New Year’s Eve of all time because she’s pregnant with boyfriend Kanye West‘s baby.

West made it official Sunday night during a concert in Atlantic City, New Jersey, telling the crowd to “stop the music and make noise for my baby mama,” according to E! News.

The 31-year-old reality star’s family has confirmed the news — and it’s easy to see they’re thrilled.

“Keeping secrets is hard with so many family members! Especially when you are so freaking excited!!!!! LOVE is everything!!!!” Khloe Kardashian tweeted after the news went public.

Momager Kris Jenner is also over the moon, judging from her tweets.

Kardashian has made no secret of her desire to have a family. She told Glamour earlier this year that she wanted a bunch of children, but her failed marriage to Kris Humphries made her think it wasn’t in the cards.

“At first I was like, I want six kids. Then I went down to four, then I was down to three, and now I’m like, maybe I won’t have any,” she told the magazine.

Oh, how a year changes things.

Kimye seem to have a (fame-) loving — and somewhat stable — relationship, so we’re thrilled they’re going to have a child.

Get ready for the onslaught of Kardashian pregnancy news in the new year — we’re fully expecting a maternity clothing line and tons of new spinoff reality shows about her pregnancy, her baby shower, the birth, etc.