The Simpson sisters prove they are both hot stuff in Hawaii as photos of them in their bikinis surface on Sunday. 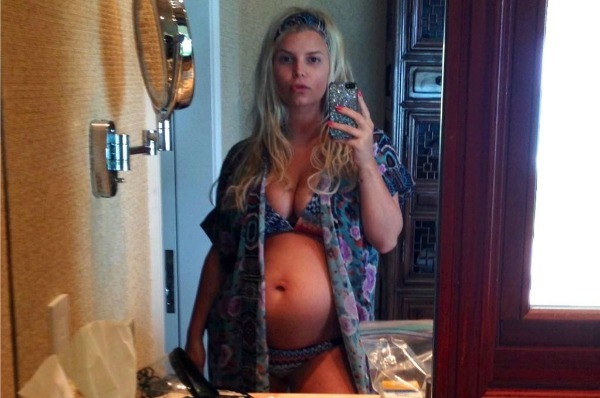 Jessica Simpson has certainly documented every minute of her vacation in Hawaii this holiday season. It started out with the Christmas Day announcement — and worst-kept secret in Hollywood — that she is indeed pregnant with baby No. 2.

Throughout the week, the Weight Watchers spokesperson has posted a variety of photos that show off her cleavage and her hidden, but burgeoning, baby bump. On Sunday, Simpson gave her Twitter followers the big reveal: the actual baby bump in a bikini.

She tweeted a self-portrait and wrote, “Bumpin’ and Proud!”

The Fashion Star judge, sporting a print bikini and floral top in the photo, clearly looks well into the second trimester. She has not given an estimated due date, but last time around, it seemed as if the reality star was pregnant forever.

This will be the second baby for Simpson, as she gave birth to her first daughter, Maxwell, almost eight months ago.

Not to be outdone by her sister, Ashlee Simpson was also rocking a hot bikini along the shores of Hawaii today with Jessica’s BFF, CaCee Cobb. Jess’ younger sister was making waves in a teeny-tiny bikini to accentuate her flat stomach and lean body.

The recently single gal was having fun frolicking in the water with adorable son, Bronx, 4, in tow. Cobb, who recently married actor Donald Faison, is there with the Simpson family over the holiday season. The only person missing from the family vacation is dad, Joe Simpson. His wife of 34 years, Tina, filed for divorce from her husband back in October.