Good Morning America anchor Robin Roberts won’t be returning to the airwaves until June 2013 as she continues on her path to good health. 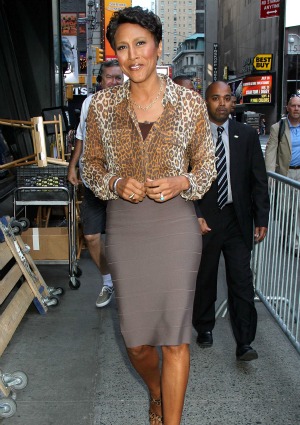 If fans of Good Morning America were hoping to see anchor Robin Roberts at the beginning of the new year, they are going to have to wait a bit longer. TMZ is exclusively reporting that the anchor will not be able to return to the airwaves until May at the earliest, with June being more likely.

Roberts was diagnosed with myelodysplastic syndrome (MDS) in the summer. The disease is a side effect from the chemotherapy she received to treat breast cancer in 2007. MDS attacks both the bone marrow and the blood.

Roberts’ sister, Sally-Ann, successfully donated bone marrow to the GMA host after finding out the two were a perfect match. The surgery took place in August, but the immune system needs to be strong before the newscaster can safely return to work.

While it is rumored that ABC network executives would like to see Roberts in place for February sweeps, June seems to be a more realistic time frame that would be cleared by her doctors. The execs are clearly fighting to keep their ratings lead over the floundering Today Show on NBC.

The good news is that Roberts is on track and progressing nicely. She just hit the 100-day mark in her recovery, which also meant she could be reunited with her beloved pup, K.J. The Jack Russell Terrier was not allowed to be around Roberts because her immune system was so weak.

Roberts tweeted about their reunion, “Look who made it back for my 100 day celebration…KJ!! We just keep staring at each (other)..can’t believe she’s finally home.”

A little puppy love is sure to lift any patient’s spirits, so it’s good to see Roberts on the mend. One thing is certain: Her return to GMA will bring huge ratings to the morning show. The Today Show crew are probably quaking in their boots right now.