Charlie Sheen finds himself in trouble again. This time, he uttered a homophobic slur at a bar opening in Mexico. 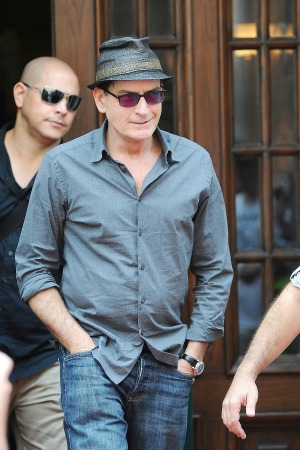 Just when you think he’s going to keep his nose clean for a bit, Charlie Sheen manages to find himself in trouble again.

On Friday night, Sheen was down in Puerto Los Cabos, Mexico, to open his new rooftop bar, Sheenz, at the Hotel El Ganzo. The Anger Management actor was busy all night emceeing the event. He introduced some of the musical acts in front of guests like Los Angeles mayor Antonio Villaraigosa and the former guitarist from Guns N’ Roses, Slash.

At some point during the night, Sheen grabbed the mic and yelled out to the audience, “How we doing? Lying bunch of f**got a**holes, how we doing?”

Of course, this was all caught on video, which was posted by TMZ on Sunday morning.

The former Two and a Half Men star issued an apology to the gossip entertainment site, saying, “I meant no ill will and intended to hurt no one and I apologize if I offended anyone.”

That apology might have been sincere if he had not added, “I meant to say maggot but I have a lisp.”

However, in Sheen’s defense, only a few audience members are heard booing at his statement. The rest of the audience seemed to stick with him despite the homophobic greeting.

It seems like the actor had a good time nonetheless, as he posted a photo with Mayor Villaraigosa and tweeted, “From Boyle Heights 2 Mayor of LA..! @hotelelganzo 2 party w/SHEEN at SheenZ..! Antonio Villaraigosa knows how to party!”

The mayor’s rep, on the other hand, told TMZ that Villaraigosa has “no comment.”

Even though Sheen has been on his best behavior as of late, it’s probably a good idea to steer clear of the actor’s winning antics.

Image courtesy of I. Kavanaugh/WENN.com