Mia Goth and Shia LaBeouf are dating. New photos show the Nymphomaniac co-stars getting cozy in Los Angeles, California, over the holidays. 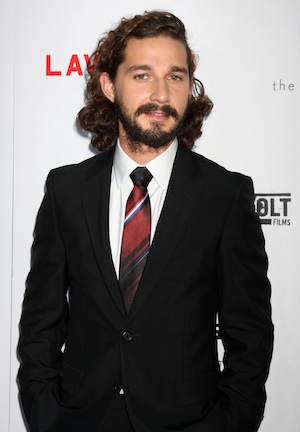 Shia LaBeouf‘s new girlfriend is Mia Goth. An actress and model, Goth reportedly became involved with LaBeouf on the set of his latest film, Nymphomaniac, in which Goth and LaBeouf engage in real sex on camera. The 19-year-old Goth hails from England, and the Daily Mail recently published photos of Mia and Shia out in Los Angeles drinking Starbucks after Christmas — both actors look low-key and a bit grungy in the photos.

Shia LaBeouf back on the market >>

LaBeouf was only single for about a month before he began dating Goth. LaBeouf had dated celebrity stylist Karolyn Pho for two years. Recent media reports said Shia’s decision to film Nymphomaniac with real sex scenes did not sit well with Pho.

A source for Us Weekly said Pho “[didn’t] want [LaBeouf] having sex with somebody else — simple. She begged Shia to ask [director Lars von Trier] if [was] possible to make the scenes appear real, rather than shoot them real.” Based on the end of LaBeouf and Pho’s relationship and his current hookup with Nymphomaniac co-star Mia Goth, we’re guessing that option was not possible.

LaBeouf has yet to confirm his relationship with Goth. Nymphomaniac is set for release in 2013. To get the lead role, he told USA Today he had to email pictures of his um, goods, for casting. LaBeouf also explained that his decision to star in Nymphomaniac is a career move intended to shift focus away from his big-budget but weak-character roles in Transformers.

“All I’m really trying to say in the most politically sensible way is, ‘Thank you for giving me the opportunities, I would just like to make movies about people now.’ That’s it.” LaBeouf continued, “If I could give the money back and get all the credibility in the world that I’m seeking, I would do it tomorrow. In a heartbeat.”

We’re not entirely sure filming real sex scenes is the best way to go, but we can understand LaBeouf’s thinking. Hopefully his new relationship will be a positive outcome of filming Nymphomaniac, even if he doesn’t receive the critical praise he’s looking for.