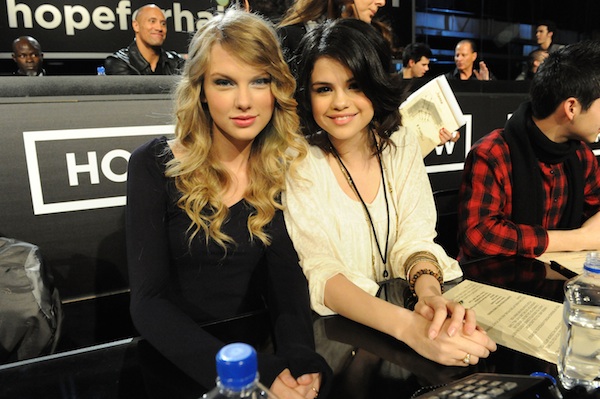 This just might be teenage pop star overload. When you’re young and rich and famous, you probably just hang out with other young, rich and famous people. Case in point: the Bieber-Gomez double vacay date with Taylor Swift and One Direction‘s Harry Styles. The group was spotted looking winter-chic in Park City, Utah. According to People magazine, both couples lodged at the luxury complex The Colony, but Gomez and Bieber stayed in a separate rental home than Swift and Styles.

The celebrity magazine also reported that while Swift and Styles hit the slopes together, Gomez opted for a ski lesson, and Bieber went snowboarding with his bodyguards.

Swift began dating the One Direction musician in early December, and she reportedly brought Styles to her Los Angeles, California, home to meet her mother just a few weeks ago. The 23-year-old Swift has yet to talk to the press about her relationship with the 18-year-old Styles.

Meanwhile, it looks like Justin Bieber and Selena Gomez are back together. Gomez and Bieber suffered a very public breakup back in November, but the press reported the pair had mended their relationship right around the time Bieber seemed to serenade Gomez during the American Music Awards. Then the couple was seen just before Thanksgiving at Gomez’s house and meeting at the Beverly Hills Hotel.

Ealier this month, paparazzi snapped photos of Justin Bieber in a new white Ferrari after he spent the night at Gomez’s home.

Hopefully Park City, Utah, is ready for the teenage pop group vacay of the world’s hottest young musicans at the moment: a Bieber-Gomez-Swift-Styles snowy playdate.