Now that Broadway play Dead Accounts is closing earlier than planned, Katie Holmes might be on the lookout for a new gig. It appears the end to her time on Broadway is fast approaching. 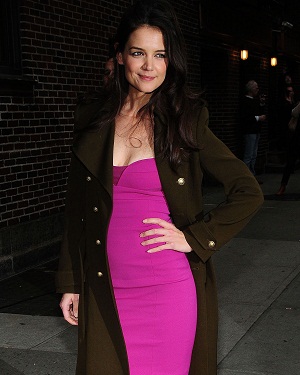 Katie Holmes‘ stint on Broadway is being cut short.

Dead Accounts, currently playing at New York’s Music Box Theatre, opened on Nov. 29, 2012, and was supposed to run until Feb. 24, 2013. However, the show will end a month and a half early, giving its final performance on Jan. 6, 2013. At the end of its run, the show will have played 27 previews and 44 regular performances.

The show’s producer, Jeffrey Finn, confirmed the news in a statement to Broadway.com, adding, “I am extremely proud of this production and the cast. Theresa Rebeck and Jack O’Brien have created an inspiring and hilarious new play and we are all sad to see Dead Accounts end on Broadway. I look forward to working with this remarkably talented cast and creative team again very soon.”

Holmes seems to have felt much the same way as her producer.

“And this cast is so wonderful,” she said, after telling ET how exciting it is to embark on the new project. “It’s just been a real pleasure to be part of this.”

With only a couple more weeks to catch Katie Holmes’ on stage, here’s what you should know about Dead Accounts: 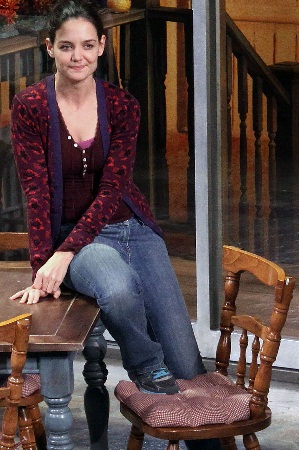 The comedy follows Jack (Norbert Leo Butz), now a “crafty” New Yorker, as he returns home to Cincinnati. His late-night appearance in his childhood kitchen finds him face to face with his 33-year-old sister, Lorna (Holmes).

Suspicious about her brother’s return, Lorna and Jack sit down to catch up over a few pints of Graeter’s ice cream (a real Cincinnati specialty). Why has he returned and where, exactly, is that awful wife of his? But, most important, how did the one-time normal suburban kid come into all this money?

If you need a fix of some new Katie Holmes, this might be your only chance for quite a while. According to IMDb.com, her schedule is incredibly light.

She currently has an unnamed project with Christian Camargo in post-production and a film called Responsible Adults in pre-production, meaning it hasn’t even been filmed yet.

We hope Katie finds more work soon, though. We completely forgive her for her transgressions with Tom Cruise and just want to see more of our Katie on the big screen.