The Talk finally persuades Neve to talk about her new baby boy. Wait until you find out his name! 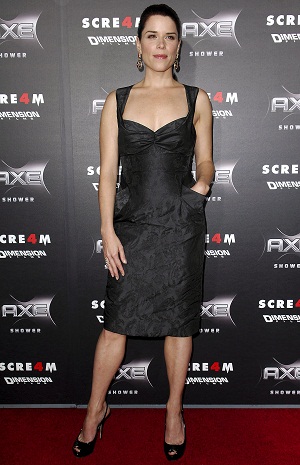 For about five months, Neve Campbell‘s new baby was one of Hollywood’s best kept secrets.

Despite fessing up to being pregnant with actor J.J. Feilds’ baby earlier this year, that’s all Neve Campbell was willing to let fans know.

The Scream star and current guest on Grey’s Anatomy told absolutely no one she had given birth. There was no tweet from the hospital or Facebook status update about being a mom, and no press statement from her rep. Just… silence.

The only hint we had that she’d finally given birth to her baby boy came in August in the form of a paparazzi picture of the beautiful actress and her beau swooning over a tiny tike at the beach.

Five months later, she finally spoke with the ladies of The Talk and let them in on the juicy details of her road to motherhood. Most important, she had a rough time coming up with her son’s name.

“I like having a unique name — it’s (my mother’s) maiden name, Neve — and not a lot of people have it,” reminded viewers of The Talk. “It’s nice having something special and different, and so I wanted something like that for our son.”

Apparently, Neve and her baby’s daddy scoured tons of books to look for the perfect name for their precious baby-to-be. They decided that they needed to meet the little guy before making the final decision, so they narrowed it down to a top five and then waited.

However, fate wasn’t taking any chances. After giving birth, the proud parents could only remember one name on their list: Caspian.

How literary! It has us wondering if by looking through books, Neve meant actual literature and not just a few of those “a million and a half baby names” suggestion books. It sounds like something straight out of A is for Atticus, an adorable baby name book full of literary names and reminders of what those characters (or authors) were like.

Congratulations, Neve — we can’t wait to see more of Cas!