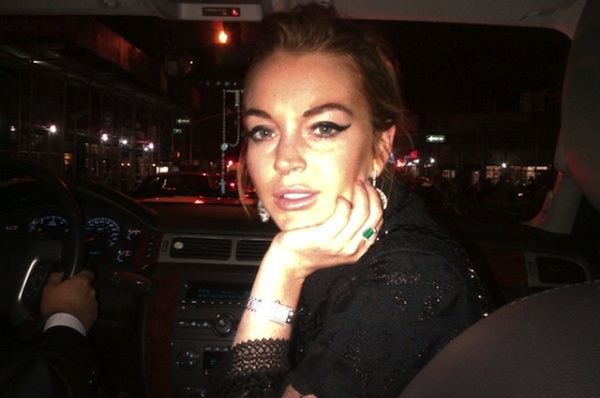 Lindsay Lohan is set to appear on Bravo’s Million Dollar Decorators on Jan. 1, 2013, and the anticipation of seeing just how much of a hot mess Lohan is died down a little, thanks to a recent preview of Lohan’s episode. In the preview (see below) Lohan “hires” renowned decorator Kathryn Ireland to make over her Hollywood Hills home — the home Lohan rents, that is.

Oddity No. 1: Lohan renovates a home she doesn’t own?

The first thing that comes to mind when watching the preview is: Why does Lohan hire an interior designer to complete some serious renovations on a home she doesn’t own? Oh, that’s right, Lohan didn’t actually hire Ireland — the episode is more likely a deal brokered between Lohan’s agent and Bravo’s producers to spike viewership. Ah, OK… moving on to our second weird factor: Lohan seems, well, broke.

The preview shows Lohan as she gives a tour of her master bedroom and living room to Ireland. Expensive purses are lined up against the walls of her bedroom and shelves. Lindsay says she “got bored and started decorating with Chanel.” What? Where is Lohan’s closet? Why are purses lined up against the wall on the floor? Items were scattered around the floor and stacked up in corners. You can see her closet is stuffed with other items and Lohan admits she “needs more storage,” yet I couldn’t shake the depressing feeling I got when I watched the tour.

I’m not sure what I imagined when I pictured Lindsay Lohan’s bed, but it certainly wasn’t what the Million Dollar Decorators showed, which was a sad, king size bed with plain white sheets that look a little worn out (although there is a Hermès blanket on the bed). The mirrored bedroom furniture seemed pretty cool — very celebrity — but everything else just felt as if you could see how Lohan fell off right off the A-list ladder. It all just says, “I was someone famous once…”

Lindsay Lohan appears on Million Dollar Decorators as a high-end client, but the sad reality is Bravo probably paid Ireland’s fees and has admitted to footing the cost of the renovation — $250,000! Lohan seems awkward with the facade as a client and the whole episode just seems depressing.

Check out the preview of Lindsay Lohan on Million Dollar Decorators and see for yourself.

Photo courtesy of Lindsay Lohan via Twitter supplied by WENN.com