Did Miley Cyrus get married? Cyrus shows off what looks like a wedding band in some Christmas photos she tweeted. 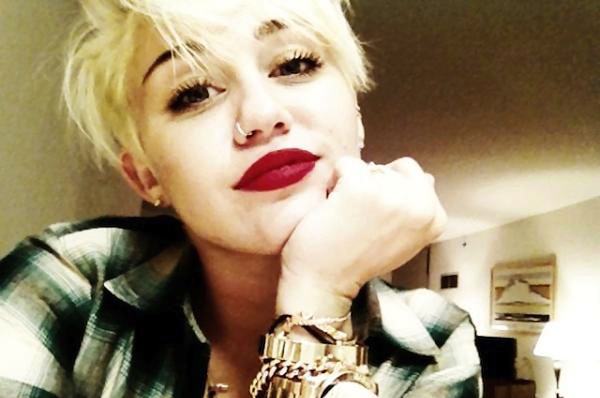 Media outlets are now reporting that Miley Cyrus may have wed Liam Hemsworth over Christmas. Cyrus tweeted a photo of herself standing next to a Christmas tree in leopard-print pajamas with a new gold band on her left ring finger. The placement of the ring next to her engagement ring seems to indicate that Miley is showing off the jewelry as a wedding band. The intriguing Cyrus picture was tweeted on Christmas Day with the caption “Ho Ho Ho!” (As in, did Santa bring Miley a wedding band?)

Since the infamous photo went out on Christmas Day, neither Cyrus nor Hemsworth has released a statement on their relationship.

TMZ posted a separate photo of Miley Cyrus and Liam Hemsworth from Cyrus’ Instagram account that shows her in a hug with Hemsworth and what really, really looks like a wedding band on Hemsworth’s ring finger.

Concrete wedding details surrouding Miley’s impending nuptials to Liam have been difficult to come by — Billy Ray Cyrus leaked to Us Weekly that his daughter planned on three wedding ceremonies, only for Miley to later state on Ellen that she was likely just going to have one wedding given the intense time investment of the affair.

Also garnering Cyrus some attention is the recent release of Miley Cyrus: The Backyard Sessions, in which Cyrus covers her godmother Dolly Parton’s hit “Jolene.” Cyrus sounds great in the song and shows off her vocal talent. You can check out Miley Cyrus’ cover of “Jolene” below.

What do you think: Did Miley Cyrus get hitched over Christmas?

Photo courtesy of Miley Cyrus via Twitter supplied by WENN.com