Taylor Swift isn’t just at the top of the music charts for 2012 — she’s also at the top of DoSomething.org’s “Top 20 Celebs Gone Good of 2012” list for her charity work. 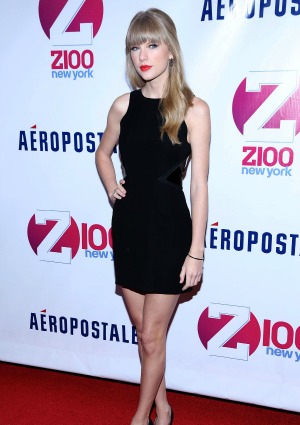 If you were looking for the top do-gooders in Hollywood for 2012, we have the official list from DoSomething.org, which released its list of the top philanthropists on Wednesday. Ranking No. 1 in the “Top 20 Celebs Gone Good of 2012” list is Taylor Swift, who is also at the top of many music lists for 2012.

Swift is followed by Miley Cyrus and People‘s “Sexiest Man Alive” for the year, Channing Tatum. The No. 1 and No. 2 positions, held respectively by Swift and Cyrus, mark huge leaps up the charts for the young entertainers. Swift was ranked No. 20 for 2011, while Cyrus held the No. 18 position.

The “I Knew You Were Trouble” singer managed to leapfrog to the top not only by donating $4 million to the Country Hall of Fame Museum but also by continuing her work with kids and cancer charities. She also received the Ripple of Hope Award from the Robert F. Kennedy Center, becoming the youngest person to ever receive that honor.

Cyrus, besides enjoying lots of time in tabloids for her latest shenanigans, also took the time to help numerous organizations, including Make-A-Wish Foundation, VH1 Save The Music Foundation, Saving SPOT! Dog Rescue and the TOMS One Day without Shoes challenge.

Last year’s No. 1 celebrity was Lady Gaga, who still managed to rank No. 4 this year along with a host of other musicians, including Jay-Z and Beyoncé, Selena Gomez and Pink. Sports stars were surprisingly light this year, with only Lebron James and Drew Brees making the list.

As Naomi Hirabayashi, chief marketing officer of DoSomething.org, said in a statement, “Musicians definitely dominated this year’s Celebs Gone Good list. From TSwift and Gaga to the Biebs, rockers really set an example for others by using their platforms to effect positive change. It gives us all something to sing about!”

The list was determined by a panel of social media/mobile specialists, along with Facebook voting by the fans. The criteria involved several aspects of charity, including giving money, taking action and inspiring others.

Several other categories were also announced this week, including the “Fan Favorite” category, which Demi Lovato won after a vote on Facebook. The organization also released its predictions for the new year with the “Big in 2013” list. Some of the hot stars to watch out for who are also inspiring to teens are Hayden Panettiere, Hunter Hayes and Bella Thorne.

DoSomething.org is one of the largest charitable organizations for teens and social change in the United States. The group is hoping to have 5 million active members by 2015.