Miley Cyrus isn’t even married yet, but she’s already turning to blow-up dolls for entertainment. Not a good sign for Liam. 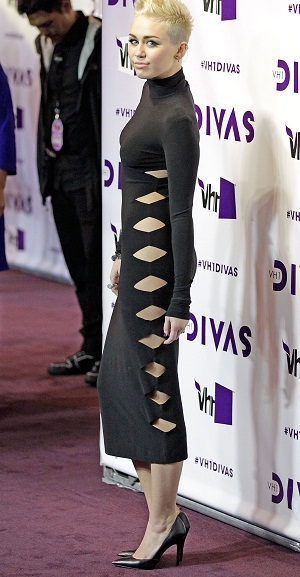 Miley Cyrus gave fans and curious followers a look at her early Christmas present this year.

“Does this count for the carpool lane?” she tweeted, posting a picture of herself alongside a blow-up sex doll inside her car.

On the upside, at least Hannah Montana is promoting safety: The blow-up doll was wearing its seat belt.

We’re not sure who bought her the vinyl friend, or more important, why, but she was pretty stoked about the gift. Could it be her fiance Liam Hemsworth‘s way of trying to keep her out of trouble while he’s filming in Philadelphia?

He’ll have to try harder than that, though. Recently, Cyrus has continued to border on appearing out of control.

Cyrus started out as the loud-mouthed star of Hannah Montana that billions of mothers allowed their daughters to look up to as a role model. However, these days she continues to promote herself in a variety of compromising positions.

For her recent birthday, one of Cyrus’ presents was a stripper. She promptly took a picture groping the stripper’s bare butt. She’s incredibly classy like that.

Her fashion choices also have been far from role model-worthy. First, she appeared half-naked at a concert to dance and sing alongside G-string clad strippers in a barely there top and leather pants with a zipper that seemed to never end. Then she showed up for the VH1 Divas concert in a dress with diamond-shaped holes all the way down the sides.

The picture with her new BFF, the naked plastic blow-up doll, is just another in her long line of attention-seeking tweets and Instagrams. Everyone is fretting over Lindsay Lohan, but should we also worry about Miley Cyrus, too? Even a seat belt can’t keep her safe if her life continues to spin out of control.