Kristen Stewart is proud of her role in On the Road — awkward sex scenes and all. 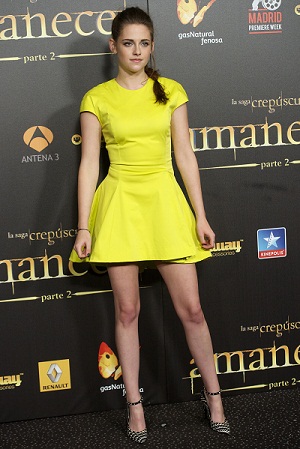 If you’re planning to watch On the Road for the sex scenes, think again.

One of the film’s stars, Kristen Stewart, says as individual moments, the sex scenes are “fairly ridiculous.” They make sense within the context of the movie, though. Obviously. And Stewart says she doesn’t regret the scenes at all.

“Actresses love to stand up and say, after they’ve shown their t**s in a movie, that it was done tastefully and that it was, you know, far from gratuitous,” she recently told The Huffington Post. “I mean, projects that really require it are really few and far between. I think that in this case, it needed to be.”

“The book celebrates being alive and it celebrates being human, and if you want to cover up and deny any aspect of that, you’re denying the spirit of the book,” she said, explaining that refusing to dive into those scenes would have only been because she was afraid to disappoint her Twilight fans.

On the Road is an adaptation of Jack Kerouac’s book by the same name. Stewart plays Marylou, a girl who married Dean Moriarty (Garrett Hedlund), but has sex with both Dean and Sal Paradise (Sam Riley).

The book, published in 1957, was a defining piece of postwar Beat generation fiction. The book and movie tell a story parallel to that of the friendship between Kerouac and Neal Cassady. Marylou’s actions may seem scandalous now, but for the beat generation, the laid-back attitude toward love and sex was completely natural. The only thing that ought to be more entertaining than the movie is the soundtrack. The Beat movement was connected to and spawned from the jazz scene.

The sex scenes might cause some controversy (don’t they always?), but Kristen doesn’t mind.

“I wanted to do it,” she said after the premiere. “I love pushing, I love scaring myself.”

Hopefully, On the Road will mark the return of the Kristen Stewart from Adventureland… a far more entertaining acting effort than films from the Twilight Saga.