Lindsay Lohan refused to kiss Charlie Sheen while shooting Scary Movie 5 due to his “spotty history.” 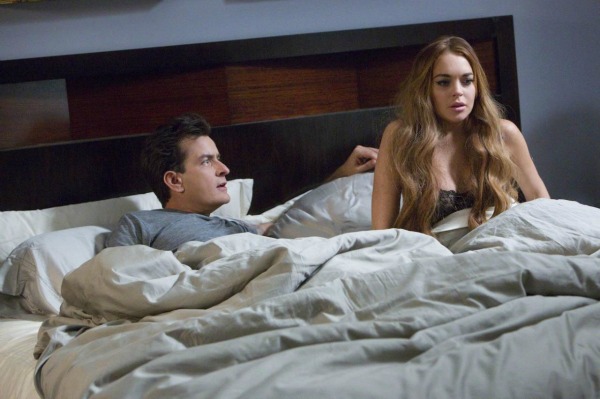 Is this a case of the pot calling the kettle black? In one of the more bizarre stories to come out of Hollywood this week, TMZ is reporting that tabloid queen Lindsay Lohan refused to kiss tabloid king Charlie Sheen while shooting Scary Movie 5.

The two actors share a bedroom scene in the upcoming horror-spoof flick. Both stars were required to sign releases that they were not suffering from a cold sore outbreak, so that should have provided Lohan with some reassurance.

However, when it came time to shoot the scene, the Liz & Dick star refused due to Sheen’s “spotty history.” Ironically, Lohan has the same wild-child reputation that Sheen has, and while it doesn’t include Heidi Fleiss call girls, it certainly involves the same amount of partying with alcohol and drugs.

The shoot had three kissing scenes, but the producers were forced to make last-minute changes due to Lohan’s refusal. Some of the kissing was written out of the script entirely, while a body double was brought in to shoot other parts.

Surprisingly, Sheen rolled with the whole situation and didn’t make a fuss about Lohan’s issues with him. Sources also tell TMZ that Lohan “warned producers ahead of time that she had issues with kissing Charlie.”

The 26-year-old isn’t having the best year after her recent Lifetime biopic bombed, she has had numerous run-ins with the law, and the IRS has seized her bank accounts after she failed to pay her taxes. In fact, it was Sheen who tried to ease her tax problems with a $100,000 gift.

It seems that Lohan will take his money, but she won’t take his kisses.