On Thursday, during the Jersey Shore finale, MTV ran a promotional clip announcing Rebel Wilson as the host of the 2013 MTV Movie Awards. 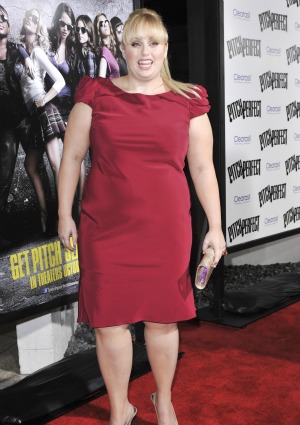 Funny ladies hosting awards shows are all the rage in 2013, with Tina Fey and Amy Poehler kicking off the season by helming the Golden Globes on Jan. 13. Now, add comedienne Rebel Wilson to that list — she has been named the host of the MTV Movie Awards, which will air on April 14.

MTV released a promotional video announcing the hosting choice. The video features Wilson being held captive while her kidnappers beat her to reveal all of the secrets behind the awards. Funnyman and Bridesmaids co-star Matt Lucas makes a cameo in the clip as her captor.

In fact, she tweeted her secret after the clip aired during the Jersey Shore finale on Thursday.

The show has been hosted by a slew of A-list comedians, including Jimmy Fallon, Russell Brand, Will Smith, Sarah Silverman and Eddie Murphy. This is the first time an Australian-born performer will have hosted the show.

The actress has had quite a year since her breakout role in 2011’s box office hit Bridesmaids. This year, she managed to steal every scene in Pitch Perfect, and she has proven her comedic chops on screen next to some of the funniest ladies in the entertainment industry.

Wilson isn’t sitting on her laurels, though. She has quite a few projects in development, including writing a pilot for a TV sitcom and starring in Michael Bay’s Pain & Gain, which will be released in 2013. She has talked a lot about being in control of her career.

In fact, she told Metro, a U.K. publication, “I’d like to do more writing/performing rather than just come in as an actress.”

It looks like the law school dropout was smart enough to know that her future is limitless and funny.

Check out Rebel Wilson in her 2013 MTV Movie Awards video.