Martha Stewart, you tease. Her magazine’s promise of exclusive pictures from Blake Lively and Ryan Reynolds’ wedding is a little disappointing. 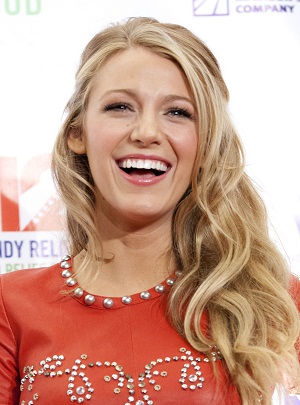 The new issue of Martha Stewart Weddings could almost be called a scam. The cover, graced with a picture of Blake Lively‘s elegant bouquet from her wedding with Ryan Reynolds earlier this year, boasts that more pictures from their wedding are inside. While they’re not lying… it’s only a half-truth.

Weddings is mostly a magazine full of pictures of bouquets, decorations and food, we concede. However, with each wedding story the magazine tells, you can always expect a few pictures of lovesick brides and beaming flower girls. Except, of course, for the story of Lively and Reynolds’ wedding.

If you want to see a picture of Blake’s entire wedding dress or of her smiling tearfully at the end of an aisle… you’re going to have to look elsewhere. (In this case, Lively and Reynolds may be the only ones with those pictures.)

Amid pictures of lavish desserts and table settings, only one picture can be found of the couple. It’s pretty sketchy, though. All you see is a portion of Lively’s (probably) beautiful lace grown, some of Reynolds’ hip, and their two hands clasped together. Worse still, it’s not even Lively’s ring hand. The photo, taken at sunset, is lovely and artistic… but not the goods we were hoping to score.

Even in the “sneak peek” on Martha’s website, the first photo is just a picture of two black paper silhouettes, presumably of the bride and groom. The lack of an actual photo gives the whole thing a creepy, witness protection program vibe.

There are plenty of other pictures to enjoy, though.

For instance, there’s a picture of their dessert table. The actual table is a long, rustic dining room table that looks sandblasted, but will no doubt have Pinterest users swooning. What’s on the table is simply drool-inducing. From s’mores bars to coffee-and-cream espresso beans, we want to dive into absolutely everything.

While we can’t even begin to imagine what a vanilla-and-sour-cream cake with peach apricot preserves and Earl Grey milk chocolate buttercream icing might taste like, we’re willing to give it a try. Another nice touch: Nearly all the desserts on the table were from semi-local restaurants near their wedding location, Boone Hall Plantation, in Charleston, South Carolina.

Here’s your warning: Don’t buy the magazine if all you want are the usual array of pics from a celebrity wedding. If, however, you want to swoon over bouquets and gasp at the nearly limitless dessert options then, by all means, buy a copy and enjoy.