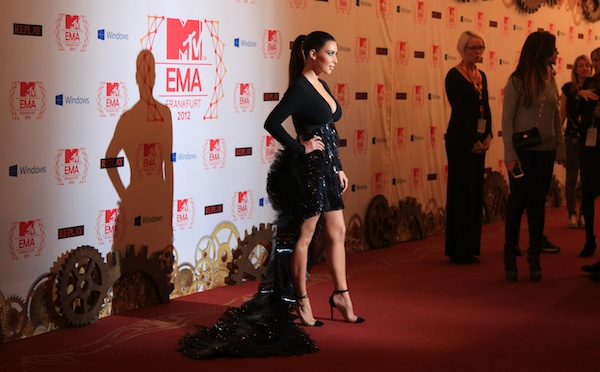 The steamy new trailer for Tyler Perry‘s latest film, Temptation, is out today. In the movie, Kim Kardashian plays the office rival to the film’s main character, Judith (Jurnee Smollett-Bell). We get to see Kim in the first minute or so of the trailer, and well, it’s pretty bad. Kardashian seems awkward as she churns out her lines. Maybe we just can’t shake our preconceived notion that she can’t act, but the trailer doesn’t do her any favors.

Temptation is Tyler Perry’s latest film, and it centers on the desires that come up when the grass seems better on the other side of the relationship fence. Judith, unhappy in marriage, feels pushed towards infidelity by an uber-rich and handsome “social media guru” Harley (played by Robbie Jones). All Judith really wants is to quit her job at the high-end matchmaking service where she works, but life has other plans. Her husband doesn’t seem too interested in her sorrows which makes her all the more likely to find solace in someone else’s great body — someone rich, powerful and handsome.

Kardashian’s role seems fairly limited, both in terms of character development and actual speaking lines. From the trailer, it seems Kim criticizes Judith on everything from her wardrobe to her career ambitions. Tyler Perry defends the decision to cast Kardashian in Temptation. Perry devoted an entire blog post back in Nov. 2011 titled, “Kim Kardashian in the Marriage Counselor” and explained Kardashian was cast to draw in a younger audience whom he feels “needs to see this!!!”

Okay, so basically Kim Kardashian is used as bait to lure in her fan base to see the movie. At least Perry can admit that was part of his casting decision. Check out Kim Kardashian in the trailer for Temptation below and let us know what you think of her role.