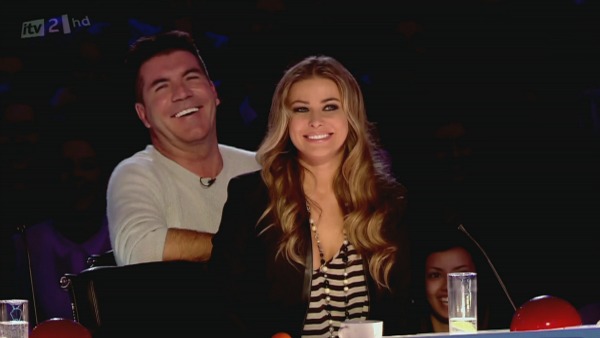 Simon Cowell‘s dating life has been the source of much speculation lately after he was spotted in Hollywood with former Baywatch babe Carmen Electra throughout the fall. The couple has been pretty evasive as to whether they were dating until now.

On Wednesday, Cowell admitted to his former American Idol co-worker, Ryan Seacrest, that he is dating Electra. He was on the host’s show, On Air with Ryan Seacrest, when he admitted, “She’s not my girlfriend. We’re people who date.”

Even though The X Factor judge doesn’t seem to want to categorize the former model as his girlfriend, it’s very clear the two are enjoying the relationship. The pair originally met when they both worked on the judges’ panel for Britain’s Got Talent.

Bush pressed on for more information about their possible hook-up, and he asked if they had ever “been in a horizontal situation.”

That is when the former Playboy model gave a pretty revealing answer with, “Maybe! My goodness! You really want to know, don’t you?”

Electra shouldn’t be too stressed out about sharing her private life to Bush. Cowell seems pretty taken with his date as well.

Even though the two are enjoying each other’s company, it is doubtful that the two will be ordering wedding invitations any time soon. They both recently broke off engagements to other people earlier in 2012. Electra broke off her four-year engagement to Rob Patterson, and Cowell ended his two-year engagement to Mezhgan Hussainy.

For now, they are just dating.