NFL quarterback Tim Tebow and Camilla Belle call it quits after two months of probably not having sex. 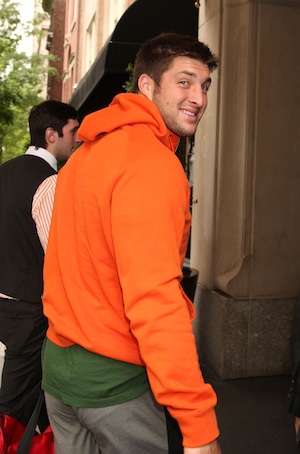 One of the hottest virgins, NFL golden boy Tim Tebow, is single again. Rumors surfaced on Wednesday Tebow and girlfriend Camilla Belle called it quits for pretty boring reasons. Us Weekly reports their inside source says Tebow and Belle “just didn’t work out.” No word yet on if that’s code for “they just couldn’t have sex.” And as if things weren’t bad enough for the suddenly lonely Tebow, the famous New York Jets quarterback was recently benched in favor of a third-string quarterback. Ouch.

Belle and Tebow began dating back in late October when TMZ posted pictures of the two “partying” in Jacksonville, Florida: in other words, they were holding hands at a bowling alley. So very wholesome. TMZ reported at the time their sources said Tim Tebow and Camilla Belle “were overly affectionate throughout the evening, holding hands and touching.”

Camilla and Tim have seemingly stayed out of the public eye since that fateful fall evening — they’ve remained off the gossip radar for months. Belle was previously in a serious relationship with Joe Jonas from October 2008 to July 2009 (Jonas previously dated Taylor Swift prior to moving on to Camilla). Tim Tebow is notoriously shy about his personal life, but his love life remains the subject of gossip columns.

Neither Camilla nor Tebow’s reps have released a statement regarding the split.