Country star LeAnn Rimes’ performance on Wednesday night’s The X Factor has viewers buzzing that the fragile star seemed out of it, maybe even drunk. 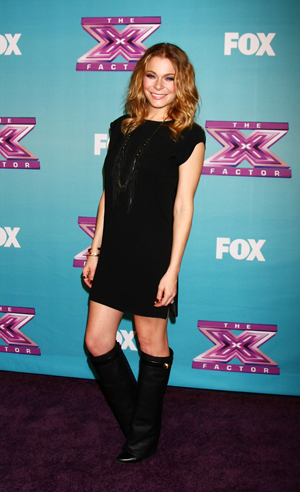 Rimes performed a duet with Carly Rose Sonenclar, who at first seemed excited to introduce “the amazing LeAnn Rimes.” The excitement quickly melted off her face as Rimes emerged from backstage, walking suspiciously wonky in over-the-knee boots.

Rimes and Sonenclar duetted on “How Do I Live Without You,” during which Rimes’ singing sounded slurred and indistinct, and she pulled her microphone away at odd times, leading to strange little gulps.

At one point, Sonenclar gave Rimes a “WTF?” look, before quickly replacing it with a practiced smile.

But when Rimes grasped her arm, seemingly for support, Sonenclar couldn’t help wincing.

Rimes has been on a bit of a tear lately: She also appeared on The Tonight Show with Jay Leno Tuesday and sang her new single, “Borrowed,” which she admitted was about now-husband Eddie Cibrian when he was still married to Brandi Glanville.

“I did go through a very public affair with Eddie, who is now my wonderful husband. The song looks into the darker moments of things,” the country star told Leno.

On The Tonight Show, however, she looked pulled together and her voice was strong. One cannot say the same for her performance on The X Factor. In several minutes onstage, we never once see the whites of her half-lidded eyes.

The Huffington Post wrote that Rimes’ performance was “uneven and uncomfortable” and pointed out that her voice “didn’t seem to have its usual strength, leading some fans to speculate online that she might have been drinking.”

It’s worth noting that Rimes entered a 30-day treatment for “anxiety and stress” in September.