It looks like the actress is directing more and more films, and her next one will be a true story that is almost too incredible to believe. But with kids, a husband and multiple movies in the works, how does she fit one more thing into her schedule? 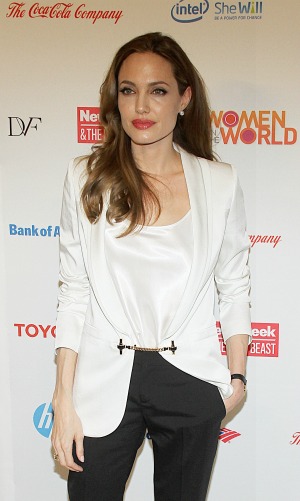 Angelina Jolie is set to add one more title to her directing credits. According to the Hollywood Reporter, she is in talks to direct Unbroken, a film based on the bestselling book by Laura Hillenbrand. The book spent 108 weeks on the New York Times best-seller list.

“In her life and in her work, Angelina has embraced stories and causes involving great struggle and triumph over tremendous odds and the basic human condition,” said Adam Fogelson and Donna Langley with Universal Pictures. “She has a real ability to illustrate the strength in human spirit, which will be essential in telling Lou’s story of survival and great heroism.”

Jolie’s name didn’t randomly appear on the list of possible directors — she said she had her eye on the film since the very beginning.

“I read Laura Hillenbrand’s brilliant book, and I was so moved by Louie Zamperini’s heroic story, I immediately began to fight for the opportunity to make this film,” Jolie said in a statement to MTV. “Louie is a true hero and a man of immense humanity, faith and courage. I am deeply honored to have the chance to tell his inspiring story.”

The film will follow Zamperini from success to devastation in a short amount of time, and Jolie feels she can show that struggle.

“Zamperini was a track prodigy who traveled to Berlin in 1936 for the Olympics at age 19, and though he didn’t medal, his speedy final lap in the 5,000 meter race so impressed Adolf Hitler that the German dictator requested a personal meeting with the runner,” said MTV. “He enlisted in the Air Force in September 1941 and in April 1942 his plane went down in the ocean, killing eight of the 11 men on board.”

Jolie also directed In the Land of Blood and Honey, a 2011 film about life during the Bosnian war of the 1990s. This story is similar in that it follows a personal struggle, much of it internal.

“The survivors lived on rain water and raw fish, and survived a bombing by a Japanese airplane before Zamperini, now 96, and another man, Russell Phillips, reached the Marshall Islands and were captured by the Japanese Navy and held in captivity until August 1945,” said MTV.