While songs, film premieres and more are getting cut or changed in the wake of the school shootings in Connecticut, This Is 40 is staying intact. Writer and director Judd Apatow explains why a game of “murder” is staying in. 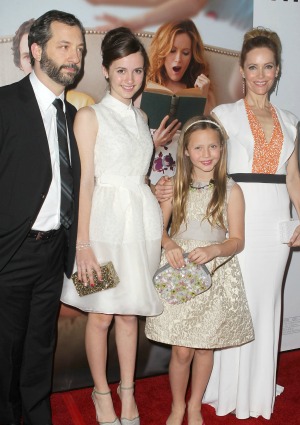 When This Is 40 opens in theaters on Friday, movie-goers will take in a scene where a father jokingly plays “murder” with his toddlers.

Despite many songs being pulled from the radio and movie premieres being postponed in the wake of the Connecticut school shootings at Sandy Hook Elementary, This Is 40 writer and director Judd Apatow says changes to his film won’t be made.

Judd Apatow is intrigued by Viagra >>

The scene in question involves Albert Brooks’ character Larry explaining to Paul Rudd how stressed out he is trying afford his three young sons, who are triplets.

Joking that he’s going to save money by thinning out the number of mouths to feed, Brooks’ character tells the kids, “Line up! Line up for murder! Come on! Who wants to be killed?”

Naturally, each of the blond-headed toddlers squeals with glee to be “murdered” with a squirt from the garden hose. He then says, “Boom, dead. You’re dead. All right, the kids are murdered. That will save us some money.”

Paul Rudd hearts Leslie Mann in This Is 40 >>

Speaking to TMZ, Judd Apatow (shown here with his two real-life daughters Maude and Iris, who also star in This Is 40, along with wife Leslie Mann) explained the scene “is spoken by a sarcastic father kidding with his children.”

The 45-year-old, previously named to Entertainment Weekly‘s list of the 50 Smartest People in Hollywood, continued, “In light of recent events, I understand if some people might make an unfortunate association or put it in a context in which it was not intended.”

TMZ reports the script was written two years ago, but it remains to be seen if keeping that particular scene in the film is such a smart move.

Do you think Judd Apatow made the right call on the This Is 40 gun joke?