Denise Richards explains why she took in Charlie Sheen and Brooke Mueller’s sons while his ex-wife was in rehab. 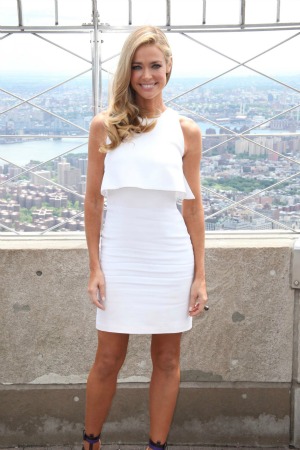 Denise Richards must be gunning for saint of the year. Not only does the actress put up with ex-husband Charlie Sheen‘s shenanigans, but she also takes care of his other ex-wife’s kids. Denise took in Brooke Mueller and Sheen’s twin sons, Bob and Max, while Mueller went into rehab for the 19th time last week.

In an interview on Wednesday on Access Hollywood Live, Richards explained why she pitches in. “They’re our family and they’re Sam and Lola’s brothers and I can’t imagine growing up without my sister, so anytime she needs help, I’m there for the boys. [My kids] are the best big sisters to [the boys] and they love them.”

Richards was married to Sheen for four years and she had two daughters with him, Sam, now 8, and Lola, now 7. She also adopted a daughter, Eloise, 18 months, as a single mother.

When the Wild Things star has all of the kids in tow, her household is quite busy.

She told host Billy Bush and guest-host Vinny Guadagnino, “This is not the first time I’ve had all five, they’re Sam and Lola’s brothers. It was a full house, lots of love and life. Brooke knows anytime, and Charlie, that any time they need help with the boys, that I’m there.”

That’s quite a healthy attitude from the mother of three who has endured public criticism from Sheen in the past. It’s quite clear she’s putting her family ahead of any strife with the Anger Management star.

She continued, “I know it doesn’t seem normal, but it is our normal. They’re little kids and I love children, and like I said, it’s our daughter’s brothers, so I can’t say no.”

Richards also emphasized that the 3-year-old twins are now home with their mother who is out of rehab.

Hopefully, Santa — or at least Charlie Sheen — is buying her a really nice Christmas gift. She deserves it.