We’ve managed to squeeze in a couple Christmas classics we cherish, but this hip new playlist is geared to switch it up a bit and show you 10 tunes you’ll love from some artists you might not expect! 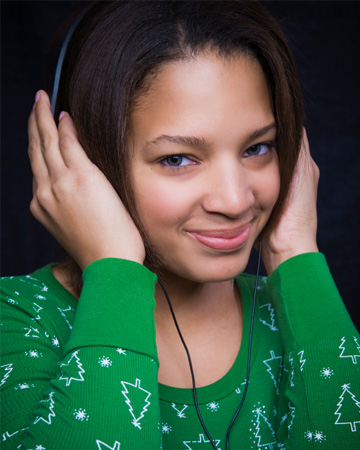 You’ll recognize the voice immediately as the same guy who voiced Sam the Snowman in the 1964 Rudolph the Red-Nosed Reindeer flick that’s still as popular as ever. Burl Ives sings with the full force of winter cheer and you can almost feel your body glowing with warmth as if from a crackling fireplace nearby. We couldn’t help but open our list with this classic.

Bing Crosby —
“Have Yourself a
Merry Little Christmas”

And we had to pay tribute to Bing Crosby. His warm baritone and casual swing elements pioneered the music experience for the first half of the 20th century. As kids, we’d put on classics like Bing and lie under the Christmas tree and look up at the twinkling lights. The subtle hypnotism was the closest thing to a Phoenix snow.

Simon & Garfunkel —
“Go Tell It On The Mountain”

Paul Simon and Art Garfunkel raised the bar on the art of harmonies throughout the 1960s. This song is a great testament to the vibrant and contagious atmosphere Simon & Garfunkel created any time they sang, and it’s a perfect tune for the holiday season.

Zooey Deschanel has a magical charm on-screen and if you’ve seen Elf, you know exactly what we’re talking about. Sure, she’s been in better films, like (500) Days of Summer and even landed a star spot in New Girl, but she blows it away on the mic. In an age of autotuners and digital manipulation, we’re thankful for the timeless composure and control of a gal like Deschanel. Add that talent to the folk master, M. Ward, and we get an amazing duo by the name of She & Him. This band’s so good we had to include two of their songs, bringing us to No. 5.

If you like what you hear from She & Him, you’re in luck. They’ve got a full album of twangy folk hits called A Very She & Him Christmas that is simply untouchable. Slow down this season and tune in.

Scotland sends its seasonal spirit in the form of Belle & Sebastian, and they’ve put out a beautiful rendition of this staple hymnal. As for the heavy accents, what a wonderful reminder that Christmas is a beautiful time of year all over the globe.

Sufjan Stevens is slightly reminiscent of Elliot Smith vocally and is perhaps one of the most well-rounded musicians of modern times. Although his Christmas album may not boast it, Stevens played over 20 instruments in his early career and his lyricism is a great match for anyone trying to grasp the spirituality of life.

Trans-Siberian Orchestra — “Carol of the Bells”

Here’s a larger-than-life rendition of one of the most beautiful Christmas carols ever. Trans-Siberian Orchestra is a 60-piece orchestra coupled with a chorus and some killer electric guitars under the brilliant leadership of some of hard rock’s greatest producers. This isn’t so much a song as a ride for your ears. If Santa’s sleigh had a theme song, this would be it.

You know the lyrics, but the Caribbean flair has to be something new for you! Jimmy Buffett takes us through a Christmas classic Margaritaville-style.

Jeff Buckley played a secret chord and it pleased the Lord. On the outside, this song may sound a bit grim or dark in contrast to the rest of our list, but these lyrics are an incredibly raw perspective into the grace and journey of faith that is so crucial to the central theme of Christmas.

Would you listen to streaming playlists if we created them for you? Share in the comments below!