Mark Wahlberg flexes his muscles in Michael Bay’s Pain & Gain. The Oscar-nominated actor headlines the new film, alongside Dwayne “The Rock” Johnson. There are tank tops, spandex and barbells galore. 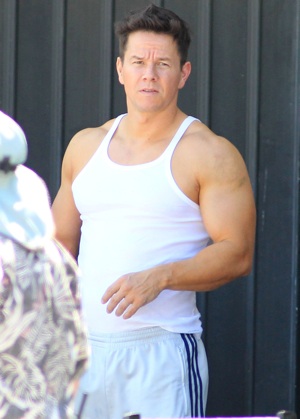 In Hollywood, being in shape is mandatory. Actors go above and beyond to look great 24/7. Earlier this year, Mark Wahlberg took his dedication to a whole new level. The actor shot Michael Bay‘s latest film, Pain & Gain, and put on an obscene amount of muscle.

The film takes place in the world of fitness. Wahlberg and his pals, played by Anthony Mackie and Dwayne Johnson, are bodybuilder types. Johnson, a professional wrestler, is always in fighting shape. But Wahlberg and Mackie really had to pack on the (good) pounds.

Dwayne “The Rock” Johnson back to Wrestlemania >>

Pain & Gain is based on a true story about three personal trainers from Miami. It’s set in the mid-1990s and follows them as they get caught in a heist gone wrong. They desperately want to live the American dream, but go about it the wrong way. It’s unfortunate for them, but good entertainment for us.

Supposedly this film got Wahlberg interested in Transformers 4. After having such a great time working with Bay, he decided to do it again. Production on the robot sequel is slated to begin next May. To date, Transformers is one of the highest-grossing franchises of all time.