Megan Fox made viewers around the world sigh with envy after flinging off her baby weight like it was nothing. Now the super-gorgeous star tells Jay Leno: My body’s not perfect. 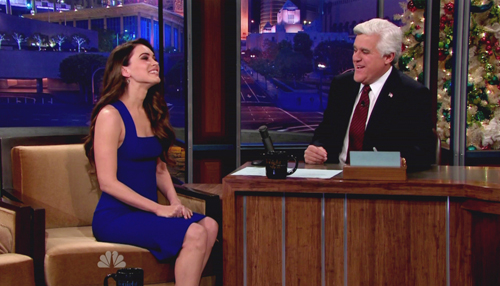 If only Megan Fox’s mom had gotten the mercury memo, her daughter wouldn’t have been born with what Fox considers her worst feature.

Fox revealed her dissatisfaction during a Tonight Show appearance with Jay Leno this week, when talk naturally drifted to her almost-three-month-old son, Noah, and Fox’s pregnancy.

Fox said she gave up sushi for the baby because of fears that the mercury found in high levels in some fish could damage her baby developmentally. Then a phone conversation with her mom turned up an interesting fact.

“I was like ‘God, are you craving things, because I’m really craving tuna and I can’t eat tuna because of the mercury,'” Fox said. “And she was like ‘Oh, I ate tuna every day when I was pregnant with you!'”

“They didn’t know in the ’80s about that, and I was wondering if maybe that’s what happened to my thumbs,” Fox continued, holding up admittedly somewhat small-looking thumbs on otherwise perfectly lovely hands.

“They’re weird and they’re really bad,” sighed Fox, who apparently lacks problems with her thighs, hips or upper arms to sigh over.

“I think it’s great that a lot of guys are willing to overlook that,” cracked Leno.

Megan Fox needs a nanny for her look-alike baby, Noah >>

Fox has been doing the talk-show rounds — she also appeared on The Ellen DeGeneres Show this week, where she told DeGeneres that it was Reese Witherspoon’s fault no one noticed baby Noah was born until weeks afterward.

“She went into labor the day before I did, and all of the paparazzi followed her to Santa Monica. So when I went into labor, I went to Cedars [Sinai Medical Center in L.A.], and nobody cared or knew I was there,” Fox explained. “So I got in and out. I left the next day and nobody knew. It was a big secret for three weeks.”

It might have stayed secret even longer if Fox hadn’t taken to Facebook on Oct. 17 to tell the world, “I gave birth to our son Noah Shannon Green on September 27. He is healthy, happy and perfect.”