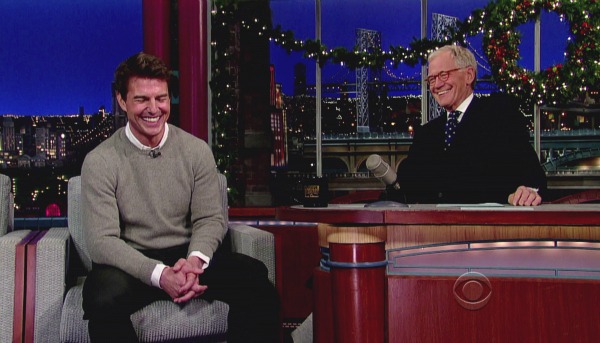 You never know what you’re going to get from David Letterman each night. On Monday, he gave a heartfelt speech about the Connecticut school shooting. On Tuesday, he dropped the F-bomb on guest Tom Cruise.

The exchange had the Jack Reacher star in a fit of giggles by the end of it. It all started when the duo discussed talking with their kids about the birds and the bees. While Cruise remained pretty tight-lipped about his 17-year-old son, Connor, Letterman sailed right through a funny story about his 9-year-old son, Harry.

While the talk-show host believes he had “the talk” too late, it appears Harry knows a lot about bad words. Letterman revealed that he and his son “had a conversation about dirty words.”

The youngster told his dad that he knows “the S-word, the B-word, and the F-word.”

The audience, along with Cruise, roared with laughter over the bleeped expletive. The censors kindly added a quirky sound effect and a blurred spot over The Late Show host’s mouth.

With the F-bomb already out there, Letterman joked with the audience by waving his hand and saying, “Good night, everyone!” just as the camera pulled away from the desk as if the show was about to end.

However, Cruise got the final laugh with his retort, “Someone’s got the plug and they’re pulling it!”

The entire exchange showcased a relaxed and fit-looking Cruise who has barely been seen in public since the summer. He’s had a tough year with his divorce from Katie Holmes and the canceled premiere of his new film due to the Connecticut shootings.

Audiences will be able to see Jack Reacher on the big screen beginning Dec. 21.