Who says Madonna is past it? At age 54, her MDNA tour out-grosses those of way-busier singers like Justin Bieber and Lady Gaga. 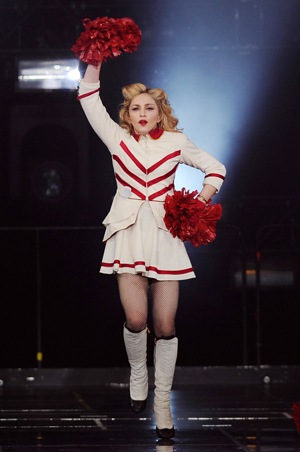 Madonna still has it — after decades in the public eye, her tour to support her album MDNA is the top-grossing of 2012, amassing a solid $228 million for 72 sold-out worldwide shows.

In fact, a whole bunch of venerable acts anchored Billboard‘s list of 2012’s top ten tours: Bruce Springsteen & The E Street Band came in second with $199 million, Roger Waters third at $186 million, and Van Halen held down the eighth spot on the list with $54 million in revenues for 46 shows. Only nine sold out, though. Elton John, Rod Stewart, Barbra Streisand and Neil Diamond also made the list.

Deliriously popular bands like One Direction, whose Up All Night tour ran much of 2012, didn’t even make the list. Lady Gaga, long thought of as a rival for Madonna, came in sixth with $125 million.

Do younger acts just not sell out as many stadiums? With concert tickets running to hundreds of dollars a pop, maybe younger fans can’t make it out for Bieber or Swift?

It should be noted that the top performers played many more shows than the also-rans on the list: Compare Madonna’s 72 sold-out shows to Bieber’s 29 and Swift’s 21.

Still, it’s notable that though Madonna’s album MDNA has not garnered terrific airplay, she still puts butts in seats.

Maybe they want to see her flash her nipple or play with fake guns onstage?