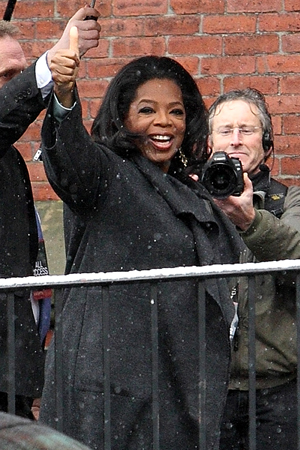 Two years ago, Oprah debuted the OWN TV network to terrible ratings and a rash of stories about how the talk icon’s reach was faltering. OWN is doing better now, and Oprah is relieved.

“I’m not doing the hula yet …but compared to a year ago, it feels like a sigh of relief,” Oprah told The Hollywood Reporter.

When OWN debuted, Oprah blithely assumed that the same viewers who made her a star in daytime talk TV would follow her to the new network. But after initial success, ratings on the network plunged 37 percent from January to July of 2011.

Naysayers quickly jumped on board to criticize the icon.

Robert Thompson, the founding director of the Bleier Center for Television and Popular Culture at Syracuse University, told Forbes that, “Some people thought anything Oprah introduced would be a hit. She could introduce the chicken pox, and people would want to get it. We now know Oprah’s name isn’t enough.”

Oprah was honest about her struggles on Facebook, where she told fans that running OWN was “ten times harder than doing my daily show,” which felt like “breathing every day. Now I’m in so many meetings I sometimes have to step out and catch a breath.”

A high-profile break-up with Rosie O’Donnell was another bummer in 2012. Oprah hoped that an O’Donnell talk show would be a big ratings hit that would draw viewers. Not so much. Many viewers didn’t even know if they had OWN, or where it was located on the cable dial.

Oprah joins Justin Bieber backstage for her Next Chapter >>

“Part of my own expectation was, ‘You’ve had 25 years of success; people will leverage that,” Oprah told The Hollywood Reporter. “But we didn’t account for people not having the channel, and not knowing how to find it, and the cable audience being different from broadcast.”

However, in recent months, Oprah has signed a production deal with Tyler Perry to bring scripted shows to the network, has been garnering decent ratings with her primetime series Oprah’s Next Chapter (the Rihanna ep pulled 2.5 million viewers), and shows such as Welcome to Sweetie Pie’s have been garnering both buzz and ratings.

David Zaslav, CEO of OWN co-owner Discovery Communications, says OWN is on target to make a profit in 2013.