While the network officially announced the cancellations Tuesday, they said neither show actually had a future planned. But the timing may be important. 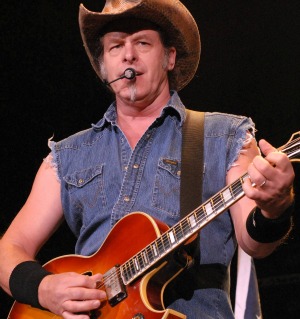 Ted Nugent’s one-hour special and/or series (depending on who you ask) Gun Country will not be returning to the Discovery Channel. But what is not clear is the “why”. Nugent had claimed from the beginning the show was a series, although Discovery never called it that.

“Nugent and his allies at the National Rifle Association (NRA) repeatedly claimed that his hour-long Discovery Channel special was actually a planned ‘series,'” said RawStory.com. “The Detroit native and longtime southern rocker even told Armed America Radio listeners in October to “expect that there will be at least a dozen shows a year.” The channel’s spokesperson confirmed that this was never actually in the works.

Nugent endorsed Mitt Romney for president and has spoken vocally about being against President Barack Obama.

“I’ll tell you this right now, if Barack Obama becomes the president in November again, I will either be dead or in jail by this time next year,” he said back in April, according to Raw Story.

After the tragedy in Connecticut on Friday, the spokesperson said Nugent, and the show, will not be returning to the Discovery Channel.

And the network, while never actually saying it, hinted that the cancellation may have been due to the recent shooting at Sandy Hook Elementary School in Newtown.

The timing of the announcement also points to the shooting having something to do with the cancellation. Even if they never had plans to work with Nugent again, the fact that they released the statement just days after the shooting may mean that the two are linked.

The network decided to cancel their other gun-related show as well.

“American Guns concluded earlier this year,” the network said in a statement to RawStory.com. “Discovery Channel chose not to renew the series and has no plans to air repeats of the show.”

Nugent has not yet publicly commented on the news.