David Letterman revealed his thoughts on the Newtown, Connecticut tragedy on Monday night’s edition of The Late Show. 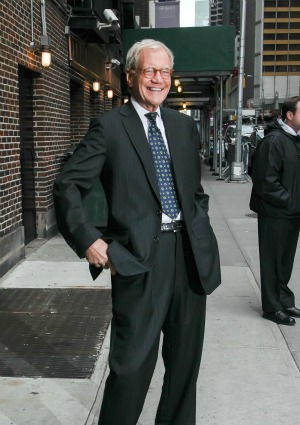 The U.S. continues to reel over last Friday’s events in Newtown, Connecticut, and the loss of 20 young students and six teachers at the Sandy Hook Elementary School. On Monday night, David Letterman weighed in on the tragic event for almost seven minutes in the second segment of The Late Show.

The talk show host continued, “Do you think about the parents and their friends and getting that message from the school and finding out that their lives are irrevocably broken, ruined? You think about your own kid. I take him to school every now and then. Are we supposed to be worried about dropping our kids off at school now?”

The audience was completely rapt with attention as Letterman revealed his thoughts until the comedian broke the silence with a joke. He said, “I never worried about it before. I always thought, well here, school is a good place where my son will be free of the idiot decisions made by his father.”

Yet the conversation did not end there. Letterman felt the need to debate the topics of gun control and mental health using facts and statistics researched by his staff.

He posed a question to band leader Paul Schaffer, asking, “Does that surprise you that there have been 70 shootings [since 1994] in a school?”

When the musician responded with a “yes,” Letterman said, “Me too. I would have thought, hopefully, that one a year would be too many, wouldn’t it?”

The funnyman seems to be looking to President Obama and his Sunday speech to the victims’ families for hope and action. Letterman said that the words of the president made him “feel a bit better about the situation.”

All eyes will be on Obama now because the late-night host is taking the president’s words to heart. Letterman finished up his thoughtful debate with, “He’s going on the record, [taking] some kind of action… In a small measure, I feel better that he’s looking out for us in that regard.”