Megan Fox stopped by The Tonight Show with Jay Leno and revealed some tough pregnancy details, including her fear she was having a “vampire baby”. 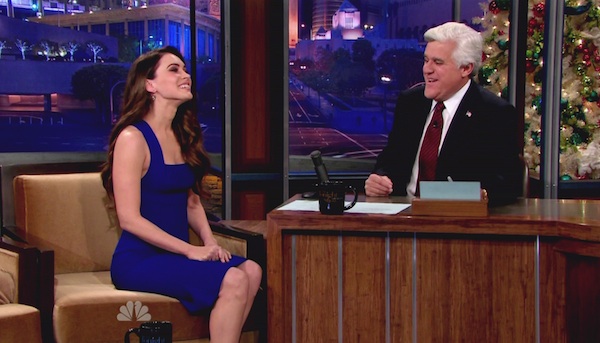 The gorgeous Megan Fox gave birth to Noah Shannon on Sept. 27, 2012. Her son — the first child for Fox and second for husband Brian Austin Green — is a glorious addition to their family, said Fox back in September. But Megan revealed to Jay Leno when she stopped by his late night talk show Tuesday that the early months of her pregnancy were extremely rough. She even had Twilight fears of birthing some kind of vampire child.

“I was about two months pregnant. I was really sick,” said Fox. “I was very nauseous. I had really bad morning sickness.” Megan continued, “It was so bad for me… I was convinced that I was, like, maybe birthing a vampire baby like the one in Twilight — you know what happens to Bella, where she’s in cold sweats all the time — and I felt like that was happening because I had no vitamins and nutrients, and I was just nauseous.” She added, “Something not human was happening!”

Her pregnancy sounds grim to say the least. When it came time for Fox to deliver, Megan also says she overestimated her pain tolerance.

“I thought I was going to be tough and the nurses would be like, ‘She’s a warrior princess! She doesn’t need an epidural. She’s amazing! We’re such big fans,'” said Fox. “As soon as I got out of the car, I was already crying for an epidural. I was asking the security guard for an epidural!”