Kelly Osbourne’s purple hair is dividing the masses. Either you’re on board with the lavender locks trend, or you’re against it — in which case the Fashion Police host presumes you’ve got “housewife hair.” 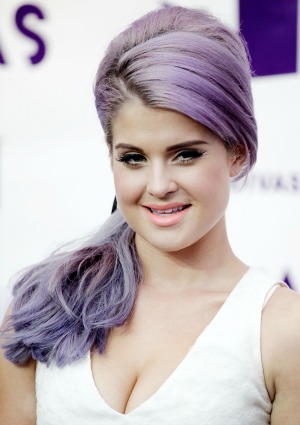 From blonde to gray and now lavender, Kelly Osbourne‘s hair color choices have everyone — including her own mother — talking.

Kelly Osbourne, seen here in full purple-haired glory at the VH1 Divas 2012 event on Dec. 16, recently spoke to Glamour magazine about the reaction she gets to her curiously colored tresses.

“When I was 13, I had hair the color of gold down to my butt,” the slim and trim 28-year-old explained. “I had an argument with my mom and yelled, ‘F**k you!’ and chopped off half my hair. My dad could not look at me without pissing himself laughing.”

Kelly’s mother, Sharon Osbourne, still hasn’t won the hair battle with her daughter. “She wishes I would go back to blonde,” the Fashion Police host went on. “She’ll call me, really serious, and say, ‘I think it’s time for a change.’ I’m like, ‘Mom, you have hair the color of a fire engine.'”

Fair enough, but why not a bright, bold red for herself?

Kelly Osbourne elaborated on the idea, “I would look like her mini-me. I tried red once, and I looked like a carrot. I also wouldn’t go too brown, because then I would look like my father. But I’ve tried green, blue, purple, black. The lavender I really like.”

“I dyed my hair shades of gray because I like it, and it pissed a lot of people off,” she went on to say when asked about how she responds to her purple-hair haters. “Now I get tweeted 20 pictures a day of girls coloring their hair like mine. So if you don’t like it, sorry — you have housewife hair.”

Do you love or hate Kelly Osbourne’s purple hair?