How do you help your children cope with divorce? According to Tom Cruise and Katie Holmes’ example, you spoil them beyond belief. 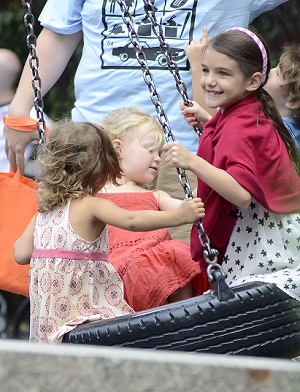 Divorce is rarely a situation children enjoy. However, we think Suri Cruise will turn out OK. After all, most kids from broken homes don’t end up with a third home all their own where their entire family will spend Christmas.

“We’ve got lots of special things planned,” Her dad, Tom Cruise, said at the Jack Reacher premiere in London last week. “We’re all going to be together.”

Britain’s Grazia magazine is reporting that an unnamed source told them Tom has spent a massive $13.5 million on a mansion for Suri in upstate New York.

When the Cruises filed for divorce, Suri and her mom, Katie Holmes, moved across the country. According to the source, a lot of Suri’s toys were left behind or put in storage. Katie may be fairly rich in her own right, but she didn’t make out with Tom Cruise’s insane amounts of money in the divorce process.

They certainly aren’t slumming it in New York, but there’s only so much square footage she could afford… or maybe find on such short notice. They also had to live in the city due to Katie’s new job on Broadway. Even the poshest NYC pad doesn’t come with boarding facilities for little Suri’s pony. (Actually, it probably does… that’s just not where they ended up living.)

The house is one ridiculous present, sure. But we’re more concerned with what “together” means. Will Tom, Suri and Katie end up under the same roof for Christmas? Or is he referring to his other children? Maybe there will be an all-out bash of Cruise children invading the Hudson Valley. It’s also possible he was referring to Suri’s pony. We’d certainly be devastated to be apart from our pony and would consider it a Christmas miracle when we were reunited.

Whatever is under (or over) Suri’s Christmas tree, we’re sure she’ll be happy. Her mom and dad both work really hard to ensure that.