Best known as the tough talking buff from The Biggest Loser, Jillian Michaels proved this year just how gutsy she really is by quietly coming out, becoming a mother of two seemingly overnight and jumping back into the gym with Bob and Dolvette. 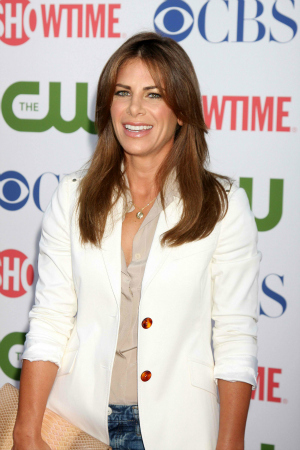 Since the world first met Jillian Michaels on The Biggest Loser, speculation stirred about the fitness guru’s sexuality. Although she never openly dated anyone on the celebrity circuit, rumor had it she and actress Vanessa Marcil shared a brief fling. Curiosities piqued in 2010 when Michaels told Ladies Home Journal, “If I fall in love with a woman, that’s awesome. If I fall in love with a man, that’s awesome. As long as you fall in love… It’s like organic food. I only eat healthy food, and I only want healthy love!” All suspicions were laid to rest this year, however, when Jillian openly acknowledged her love for longtime partner Heidi Rhoades.

If people were surprised to learn Michaels was gay, the revelation that followed her coming out likely shocked them even more — Jillian and her partner Heidi were now parents of two. Motherhood happened almost overnight for the duo, as Rhoades gave birth to the couple’s son Phoenix the same week their adoption of a 2-year-old girl from Haiti named Lukensia was finalized. Now Michaels and her partner are enjoying learning to balance life as parents of both a toddler and an infant… no easy feat, even for the tough-as-nails trainer.

Two babies and no pregnancy for Jillian Michaels >>

Back on the ranch

Two years ago, Michaels walked away from her fame-making role as a trainer on The Biggest Loser in order to focus on family. With that goal shaping up beautifully, a return to the ranch is a welcome reunion for the fitness fanatic’s fans. She’ll be rejoining old sparring partner Bob Harper — natch! — along with relative newcomer but fan favorite Dolvette Quince. Not only will this year’s show benefit from all three coaches, but it will have a new twist — the contestant age range this year dips as low as 13 years old. So how will new mom Michaels handle working with kids? “Having recently become a mother of two, I am more passionate than ever about helping empower children and families with the information and resources they need to live a healthier life,” she said in a recent statement.

A familiar face returning to The Biggest Loser >>