Director Judd Apatow and actress Leslie Mann explain why their new movie This is 40 is not an exact imitation of their real life with daughters Maude and Iris, despite how similar it seems. 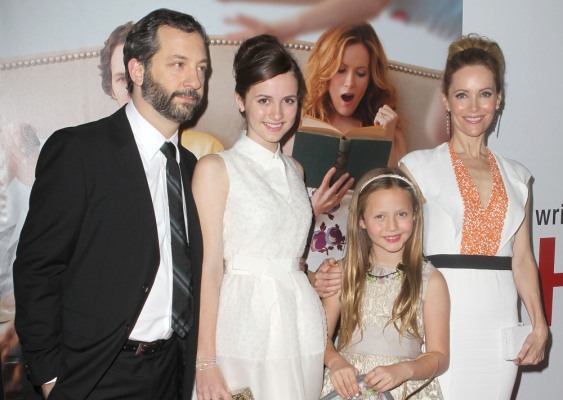 Judd Apatow‘s sort-of sequel to Knocked Up, This is 40, is a movie about a married couple with two daughters who are struggling to keep the spark alive in their relationship while navigating parenting and ageing. It’s a relatable story for many couples, but more so for Judd himself, whose wife and two daughters star in the film.

WATCH OUR INTERVIEW WITH JUDD APATOW

“It’s like a little peek of truth but it’s exaggerated,” Judd told us when we sat down with him recently. “Leslie and I don’t actually fight like that. But maybe we would want to, it would be fun. We don’t yell at the parents at our school, but we want to. It’s partially real, partially from friends, and the disgusting parts are taken directly from Paul Rudd’s life.”

With Leslie Mann and the couple’s daughters Maude and Iris making up this “make believe” family, the only thing missing to make it real is Judd himself. That’s where Rudd comes in.

“I would but I lack charisma,” said Apatow when we asked why he didn’t choose to star in the film as well. “Paul Rudd has better abs than me, he’s less hairy than me, and he’s more likeable. It’s a way for me to get certain inadequacies about myself on camera but with a more likeable person doing it. People need the buffer.”

Leslie agrees that the movie isn’t an exact snapshot of their lives together, calling it simply “emotionally truthful.”

Although Rudd, who is also a father of two, isn’t really the inspiration for the “disgusting parts” of the movie, he could also certainly relate to the realistic scenarios.

“My kids are younger but there are certainly things I relate to,” said Rudd. “The main thing being a hope that you are doing a good job but an understanding that you are screwing up in ways, and traumatizing them in ways that you don’t know.”

WATCH OUR INTERVIEW WITH LESLIE AND PAUL

Unlike her character, Leslie, who turned 40 this year, says she enjoys getting older.

“It seems like, because today’s a good day, it’s kind of fun,” Leslie told SheKnows. “It seems like we’re getting better in a lot of ways. Our bodies may be slowly deteriorating but I like having conversations with women in their 40s.”

Be sure to catch Leslie Mann and Paul Rudd in Judd Apatow’s film This is 40, in theaters today.