Bette Midler was asked by Glee creator Ryan Murphy to guest star on the Fox show. No date has been set yet, but the Divine Miss M wants in! 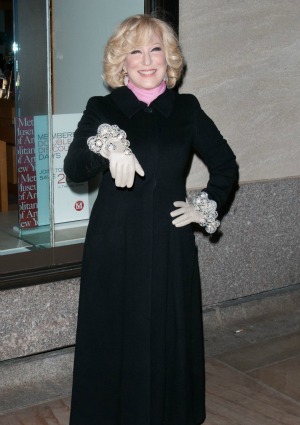 Is Bette Midler stumping for a television role or is the rumor about her appearance on Glee true? Well, it seems to be a little bit of both.

The Parental Guidance star was asked to appear on the show by its creator, Ryan Murphy, while they were both attending an event for fashion designer Michael Kors.

Midler told Access Hollywood that Murphy, who was also honored that evening, publicly asked her in his speech, “If Bette Midler’s in the house I want to invite her onto ‘Glee,'” she recounted. “And I went, ‘OK!'”

Who wouldn’t say yes? The Fox show has become a stomping ground for some of television’s best cameos. Everyone in film, TV and Broadway has been itching to be on the show. The series has hosted Hollywood A-listers like Gwyneth Paltrow, Britney Spears and Kate Hudson.

When will this big cameo happen? Well, that remains to be seen. The Divine Miss M told the entertainment show, “He mentioned it, but… I’m still waiting for the call. But, it’s fine!”

The best part is that Midler already has her eyes on a storyline where she could be the “evil sister” of Coach Sue Sylvester, played by Emmy-winner Jane Lynch.

Whatever role the actress does play, it is guaranteed that a Midler sighting on the hit show would be the perfect casting for the next television sweeps period.

In the meantime, fans can catch Midler on the big screen beginning Dec. 25 in the family comedy Parental Guidance with Billy Crystal and Marisa Tomei.