President Bill Clinton will get the Hollywood treatment with his own HBO documentary directed by Martin Scorsese. 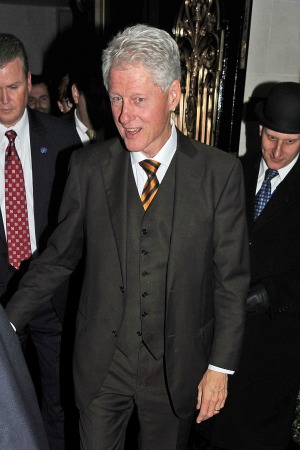 One of the most affable presidents of the last 30 years is getting the official Hollywood treatment by Oscar-winning director Martin Scorsese. President Bill Clinton will be the subject of a documentary that Scorsese will produce and direct for HBO.

HBO chief executive Richard Plepler and programming president Michael Lombardo released a joint statement on Monday: “President Clinton is one of the most compelling figures of our time, whose world view and perspective, combined with his uncommon intelligence, make him a singular voice on the world stage. This documentary, under Marty’s gifted direction, creates a unique opportunity for the President to reflect on myriad issues that have consumed his attention and passion throughout both his Presidency and post-Presidency.”

The documentary has the full cooperation of the 42nd president and will reflect upon his time in the White House office and his return to private life.

President Clinton seems pretty happy with the star treatment. He said in a statement, “I am pleased that legendary director Martin Scorsese and HBO have agreed to do this film. I look forward to sharing my perspective on my years as President, and my work in the years since, with HBO’s audience.”

Scorsese is ready to tackle Clinton’s legacy both in and out of office. His statement promised a more intimate look at the former president. Scorsese said the president is a “towering figure who remains a major voice in world issues. Through intimate conversations, I hope to provide greater insight into this transcendent figure.”

This documentary continues Scorsese’s work with the cable channel. Besides the Clinton documentary, the director is also the executive producer of the network’s critically acclaimed show Boardwalk Empire, and he’s created documentaries on subjects including former Beatle George Harrison and author Fran Lebowitz.

No official premiere date has been announced yet.